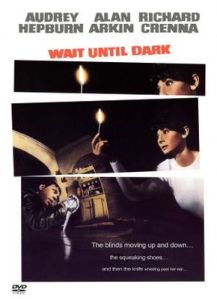 Plot:  Lisa (Samantha Jones) smuggles a doll filled with heroin into New York City, but hands off the doll to a man she met on the plane, Sam (Efram Zimbalist, Jr.), when she suspects she’s being followed. Sam comes home to his blind wife, Susy (Audrey Hepburn), and the two of them somehow misplace the doll, unaware of its contents. Lisa’s two partners, Mike Talman (Richard Crenna) and Carlino (Jack Weston) are met at Susy and Sam’s apartment by the man who intercepted Lisa at the airport, Harry Roat (Alan Arkin). Roat offers them a chance to help him find the doll, replacing Lisa, who he has killed for trying to “go into business” by herself. Susy arrives home, sensing the presence of people in her apartment but believing the crooks to be her neighbor’s daughter, Gloria (Julie Herrod), playing pranks on her because she has a crush on Sam. She leaves, and the men go about the business of disposing of Lisa’s body.

The next day, after Sam leaves for a business trip, Talman enters the apartment, posing as an old friend of Sam’s. Carlino and Roat get in on the con game, attempting to convince Susy that Sam has been unfaithful to her, and that his lover brought the doll to their home. Susy and Tallman search the apartment for the doll, Susy believing that if the police find it they’ll use it as evidence to charge Sam with murder. Later, Gloria appears with the doll, which she stole earlier. Gloria’s observations feed Susy’s suspicions, and they hide both the doll and Gloria when Carlino returns. Susy sends the crooks on a wild goose chase for the doll, and alone in the apartment, realizes they have cut the phone line and left her stranded, so she destroys all the light bulbs in the house, planning a final offensive. As Talman returns for the doll, Roat runs down Carlino with his car to get him out of the way, then returns and kills Talman, leaving him alone in the house with Susy. The final showdown between Susy and Roat, of course, takes place in the dark.

Thoughts: Audrey Hepburn was not only one of the most beautiful women God ever placed on this Earth, but also one of the most talented actresses. Her portrayal of blind Susy Hendrix is absolutely convincing, from the look in her eyes to the way she moves about without actually looking at what she’s doing. How many actors could pull that off so consistently without relying on the cheat of dark sunglasses to hide their eye movements?

I’ve done plenty of college and community theater, and it’s pretty easy to see this movie’s pedigree as an adaptation of a stage play. The plot is somewhat complicated, but is still mostly contained in the Hendrix apartment. Any scenes that take place beyond the apartment give only fleeting bits of information, things that were probably kept in the apartment itself when the story was told on stage. (With the possible exception of Carlino’s death scene – and even that could have easily been explained. I doubt the stage production includes someone getting run over by a car.) The rhythm of the dialogue, the expository nature of it, also feels much more like a stage play than a screenplay. There’s even a great moment where Gloria, acting as Susy’s secret weapon, quips that she wishes something like this would happen every day. In the context of the film, it’s kind of a ridiculous thing to say, but on stage I can see it helping the audience laugh and relieve a hint of tension just at the right moment.

That said, the writing really is magnificent. Frederick Knott’s original story and the screenplay by the Carringtons both paint Susy as a remarkable, resourceful woman. The criminals think her blindness will make her an easy mark, but she turns it around on them, first using her other senses to poke holes in their con game, and then turning it into a weapon in the brilliant climax.

Strictly speaking, this isn’t really a “scary” movie, not like the ghost and monster films on this list, not even like the serial killer shocker Psycho. But it’s undeniably thrilling. Part of it is Hepburn herself – she’s so universally charming and beloved that you can’t imagine anybody wanting to harm her. Part of it is the character – Susy is someone with real courage and intelligence, the sort of person you just want to see achieve a victory over the dark forces are plaguing her. The cool, calm way she faces Talman after the masquerade is exposed is completely gripping, the sort of thing that makes theatre audiences cheer with excitement. In the end, I only wish I could have seen this movie in the theaters when it first came out, when the managers shut off even the dimmest lights, bringing the audience into total blackness just when the lights go out for the bad guys.

The final scenes of this film are legendary. Susy kills the lights, then douses Roat in his own gasoline so he doesn’t dark strike a match. Plunging the screen (and theater) into darkness, Susy keeps him tapping her cane so she knows where he is, while at the same time holding him off with his own matches, the only light source. Roat gets the upper hand again when he opens the refrigerator door, but again, Susy’s blindness becomes a weapon. The musical doll tell her exactly where he is, the noisy, plastic gloves he’s wearing alert her to the fact that his hands are not currently holding a weapon. And when he drags her off to the bedroom, where again, the light is gone, it’s Susy who gets the upper hand. The finale does pull out what has since become a horror cliché – the presumed-dead villain who comes back in the last seconds – but in this early stage it’s still thrilling, and just this once, it leads to a spectacular finale.

Tomorrow it’s time to get supernatural again, with the godfather of modern zombie movies: Night of the Living Dead!