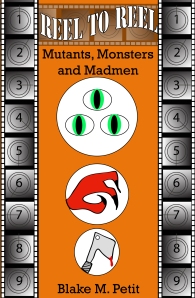 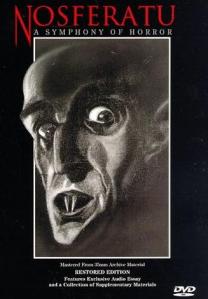 Plot: A wizened old man seeks a new home and becomes obsessed with the wife of his real estate agent. As it turns out, the mysterious Count Orlok has a much darker agenda than finding a castle to call his own. This unauthorized adaptation of Bram Stoker’s Dracula is rightly considered a classic.

Thoughts: You don’t often see a movie that resulted in the bankruptcy of a studio considered one of the greats (except, of course, Cutthroat Island), but here ya go. The estate of Bram Stoker refused to allow permission for F.W. Murnau to adapt Dracula in a movie, but showing the kind of spunk and sass that have made the Germans so beloved throughout history, Murnau just changed the names, abandoned some subplots, and made it anyway. Stoker’s estate sued, Prana Film went out of business, and an attempt was made to destroy all copies of the movie. Fortunately for us, that attempt failed, and the movie is now in public domain.

This film, a silent movie of course, is incredibly successful at creeping you the hell out, and a lot of the credit for that has to go to Max Schreck as Count Orlok. Although he doesn’t really fit into what we not think of as a classical interpretation of Dracula (although the “classic” Dracula is really Bela Lugosi’s interpretation), he’s become an archetypical monster in his own right. Orlok’s body is incredibly slender, almost unnaturally so – his limbs, his torso, his head all look like they’ve been stretched out. The  extremities, on the other hand, are all pointed and sharp – his fingers, his nose, his chin, his ears. Add that to his sunken eyes and you can see monsters from throughout the 20th century. The long body stirs up images of H.R. Giger’s Alien, the pseudo-zombies from the 2007 I Am Legend, any manner of creeps and crawlies, all the way up to the new Slender Man urban legend. In the introduction to this little project, I talked about the unknown being one of the pervading human fears. I didn’t mention one that may be even a little stronger – the manipulation of what is known. Orlok’s body is supposed to be human, but the little tweaks and alterations that define the character make him something even worse than what we don’t know: it makes him into what we should know, but don’t.

Think of it this way. We turn on the news, we hear terrible stories about things done to children by some nutjob or psychopath. I don’t feel the need to elaborate here, you guys know as well as I do what some human-shaped monsters are capable of. We hear these stories, and we think it’s terrible. But how much worse is it if the monster isn’t some random stranger, but someone the victim knows, someone they thought was a friend, maybe even a member of their own family?

It’s an extreme example, but the same principle that makes Orlok so creepy. Fortunately, trapped as he is on the movie screen, it’s a hell of a lot safer than the psycho on the news.

Anyway, on to a bit lighter fare. I haven’t included many silent films in this project (just one more after this one), but this movie really illustrates the need for a good print of these films. Nosferatu, of course, is in public domain now, which allows anybody to do whatever they want with it. In some ways, that’s a good thing – look at the 2000 film Shadow of the Vampire, about the making of Nosferatu, in which Willem DaFoe plays Max Schreck as a real vampire. It’s a great piece of work that couldn’t have been made were it not for public domain laws. (Which is funny, when you think about how Nosferatu was made in the first place, but there ya go.) The problem is, this allows people to put out really bad versions of the film. This was one case where I didn’t think I would need to turn to NetFlix for my hit, as I already happened to have a DVD set of many, many vampire films, Nosferatu included. As I started the movie, I realized that this version had actually changed all the title cards, replacing the names of Orlok and company with the original names from the Dracula novel. I realize, logically, that this shouldn’t have impacted my enjoyment of the movie, but I had a gut-level reaction that rejected the entire thing as wrong and bad and evil!

I turn into a purist at incredibly strange times.

So I did turn to NetFlix, where I found Nosferatu: The Original Version, which did in fact have all the classic names right where they belonged. This was much more acceptable… but in a few minutes, I found a flaw with this version as well. The music. Dear lord, the music. Old silent films we watch today don’t have any soundtrack except the one tagged on by whoever releases the DVD, and whoever put out the “original Version” of Nosferatu included one god awful super-synthesized soundtrack that went from happy, chirpy music at the beginning to a better (but weak) score towards the end. You’ve got to have the right music for these silent movies to make them come across properly. NetFlix also has a listing for Nosferatu: The Gothic Industrial Mix which, frankly, is a prospect I find horrifying.

While I can appreciate the artistry of these old silent films, I do have to admit, it’s hard to connect with them. I’m used to a completely different kind of filmmaking, and although there’s a definite style to telling a story I this way, it’s not my style. Only one more film from the silent era, and then we’ll move on to the talkies. Come back tomorrow for 1925’s Phantom of the Opera.