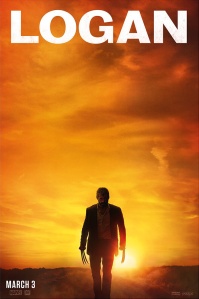 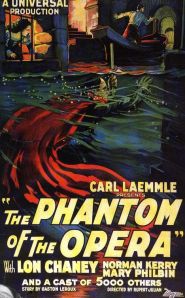 Plot: As new owners take possession of an Opera House, they begin to hear tales of a Ghost that inhabits its walls. The Phantom, as he calls himself, begins leaving threatening notes, telling them to place Christine Daae in the lead role of their performance of Faust. When they fail to comply, a curse is brought upon the house, the Phantom abducts Christine, and a chase for her life and the survival of the opera house ensues.

Thoughts: This is the last of the silent films I’ll be watching for this little experiment, but I think it’s easily my favorite. To begin with, it’s just extremely well made. The sets are elaborate and well-constructed, the performances aren’t quite as over-the-top melodramatic as many silent era performances tended to be, and the work of the immortal Lon Chaneyas the Phantom is truly extraordinary. It’s said he did his makeup himself, and that it was hidden from the audiences until the premiere of the film. Contrast that to the movie trailers we get these days, that give away the entire damn movie in 90 seconds. Chaney, friends, was a true showman.

But I think something else that helps this film appeal to me is that it feels more modern in the telling than the other movies I’ve watched. It’s still silent, of course, but I’m starting to see a lot of the language of modern storytelling begin to appear. This film is not merely a filmed stage play, the way so many early films are. There are different angles, different cuts, different ways of telling the story we didn’t see before. It’s not as drastic as the cinematic evolution we’d later get in Citizen Kane, of course, but it’s definitely there. There’s a scene, for instance, where Christine (Mary Philbin) and her lover (Norman Kerry) fall down in the midst of an angry mob. Instead of watching them overwhelmed, the camera stays with them while the mob runs around it. It’s not an unusual shot at all by modern standards, but by the standards of the time it was a really clever trick.

In terms of horror, we’re seeing the monster beginning to evolve as well. The Golem was literally a lifeless beast, propelled by the whims of its creator. Count Orlock in Nosferatuwas evil for evil’s sake – which can be terrifying, but lacks some depth. Erik, the Phantom, progresses cinematic monsters to the next level by giving him an actual motivation: love. Granted, it’s a sick, twisted kind of love, but let’s be honest here, so are half the relationships you see on screen these days. (It is arguable, for example, that Erik is any worse for Christine than Edward is for Bella in the Twilight franchise.) Erik is a madman, of course, and a multiple murderer, but by giving him that warped love for Christine as his motivation, we’re given for the first time a monster that we can really understand.

Aside from his motivation, the Phantom’s methods also start to hint at the evolution of monsters in modern cinema. We see him employ a lot of the techniques that become familiar in later years – not just the secret passages and the skulking in the shadows, but the methods of abduction, of leaving the bodies of his victims in rather theatrical poses to best terrify the survivors, and the use of deathtraps. I really liked the deathtraps, in fact – rooms of mirrors, hotboxes, tricking Christine into starting a flood that threatens the life of her lover… these are the trademarks of later monsters and mad scientists, everybody from the Joker to Jigsaw, and it all seems to begin right here.

Once again, though, I’m forced to deal with what seems to be a piecemeal print of the movie courtesty of Netflix. The film is dark, moody, atmospheric – all kinds of great adjectives you want applied to a horror movie. Then, out of the blue, a scene in the middle of the film is in full color. It doesn’t quite look as oversaturized as most colorized movies, so I’m forced to wonder if the scene in question is actually taken from another film and wedged in here – but all of a sudden we see the monster waltz into a ballroom scene wearing a bright crimson costume with a skull mask. The lighting is bright, the scene could be in broad daylight, and the effect is ruined. The only thing that makes me less than 100 percent certain the scene is plucked from another film is that Chaney arrives in the next scene – once we’re back in the proper black and white milieu – wearing exactly the same mask.

The ending is the biggest deviation from the original novel, and it seems we’re given here an early example of focus groups altering a film. The original ending filmed, like in the novel, featured the Phantom dying of a broken heart when Christine leaves him. Test audiences apparently felt it wasn’t dramatic enough, so a new ending was shot featuring the Phantom fleeing from an angry mob that finally manages to overwhelm him, beat him, and throw his body into the river. You’re even left with a nice shot of bubbles rising to the surface, leaving the lingering question of whether the Phantom died from the beating or drowned once they had him down.

More so than the other two silent films, in this one I’m really starting to see what we recognize as a horror film today. And I’m really enjoying that.