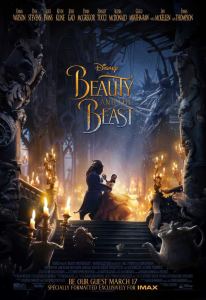 Favorite of the Month: Beauty and the Beast (2017)

Writer: Peter Benchly & Carl Gottlieb, based on the novel by Benchly

Plot: On Amity Island, tourists come to spend relaxing summer months. There’s nothing relaxing this year, though. A young woman is drawn underwater and killed by some unseen creature, and police chief Martin Brody (Roy Scheider) finds her mutilated remains a few days later. The coroner labels her death as the result of a shark attack, prompting Brody to order the beaches closed. The town Mayor (Murray Hamilton) overrules him, worried that shutting down the beaches will ruin the summer tourist season, the town’s main source of income for the year. Predictably, there’s another attack – this time a child, and in the middle of a busy afternoon on the water. The child’s parents offer a $3000 reward for the shark, and the town goes wild. As a debate rages about closing the beaches, a professional shark hunter named Quint (Robert Shaw) offers to kill the beast, but will only do so for $10,000.

Brody calls in a marine biologist named Matt Hooper (Richard Dreyfuss) to help, even as would-be hunters from all around converge on the island to try to find the shark. Hooper can tell from examining the first victim that not only was it most definitely a shark, but the one that’s much bigger than any ordinary shark. The mayor still refuses to close the beaches on the Fourth of July, and on the big day the beaches are more crowded than ever. Brody and Hooper assemble a small army to patrol the waters, but the beast  strikes again. The Mayor finally agrees to hire Quint to kill it, and Brody and Hooper join the old salt on the water. As the men share a drink, the creature strikes the boat, cracking the hull. The shark starts to pull the boat out to sea, flooding it in the process. Quint heads for the shallow water, hoping to suffocate the beast, but he burns out the boat’s flooded engine and it dies. Hooper enters a shark cage and gets into the water, hoping to shoot the shark in the mouth with a poisoned harpoon, but fails. The shark breaks the cage apart, coming after Hooper before surfacing and going for the boat. As the ship begins to sink under its weight, Quint is eaten. Brody manages to cram Hooper’s space scuba tank into the monster’s mouth, then shoots the tank, causing an explosion that kills the beast. With the shark dead, Hooper surfaces and the survivors begin to piece together a crude raft to paddle back to shore.

Thoughts: Some people will argue that this isn’t a horror film. I say they should tell that to anyone who was afraid to go to the beach in 1975. Although the film is only rated PG, this in the years before there was a PG-13, Spielberg managed to get in some pretty gruesome imagery, such as when the shark’s first victim is found. You don’t really see how mutilated her body actually is, because what’s left of it is swarming with crabs. Other films would use flies or maggots, but somehow this is just as disturbing, if not more. Spielberg also gives us a nice chill using the “less is more” philosophy. The truth is, we see very little of the shark because the mechanical beast built for the movie really wasn’t all that convincing. But because Spielberg had a crappy shark-bot, he avoids actually letting you see it for as long as possible, scaring you way more than he could have if he’d actually shown you a convincing shark. Like Hitchcock in Psycho, Spielberg avoids showing you the evil and allows your brain to fill in the blanks.

Atmosphere, of course, is all-important in these movies, and Spielberg achieves that perfectly with the help of his frequent collaborator, John Williams. Williams has scored (I believe) all but one of Spielberg’s directorial efforts, and he’s turned out some of the most memorable movie music of all time, starting here. The Jaws theme is still emblematic of fear, and the rest of the score lets you feel the danger all around you.

The film works on the level of the “townies versus the outsider” mindset as well. Brody is the outsider – he’s been sheriff and lived on the island for less than a year. When he wants to shut down the beach, not only does the mayor strongarm him out of it, but he gets the coroner to change his diagnosis from “shark attack” to “boating accident.” I’m no doctor, but I can’t imagine that any competent one couldn’t tell the difference between a body that’s been hacked up by a propeller and one that’s been chewed, if for no other reason than the pattern of damage to the bone would be different.

In some ways, you almost watch two different movies when you watch Jaws. For the first 70 minutes or so, you’re in the town, experiencing the fear of the townies as the truth about the shark becomes evident. The last 50 minutes is all about the three men at sea, hunting the creature, and taking on a somewhat different tone. There’s still fear, but it’s more immediate. In the first half of the movie, as long as you’re on the land you know you’re safe. Once they set out to sea, the danger is most definitely all around. It gets even worse in the climactic scene, when the engine kills and our heroes are stranded with no means of escape. There’s something terrifying about that, and that’s what makes this movie work so damn well. I don’t even care if the Mythbusters proved that the exploding scuba tank wouldn’t really work, that doesn’t make the finale of this movie any less exciting.

And let’s be fair here – this is one of the most eminently quotable scary movies of all time. Little quips like Brody’s “That’s some bad hat, Harry” or Hooper’s “They’re all gonna die” have pervaded the common lexicon. Quint’s speech about killing the beast or the injury-comparing scene have been quoted, copied, and parodied so often that younger people familiar with the tropes may not even be aware of where they originated. And who can forget, “We’re gonna need a bigger boat”?

Jaws changed not only horror movies, but the movie business itself. It was the first film to use “wide release” as part of its campaign, opening everywhere instead of rolling out in a few cities at a time, which is now the common practice. It was also a gargantuan success financially, inventing the blockbuster motion picture and starting the practice of films distributing their major releases during the summer months. It was the first film to advertise heavily on television as well. Pretty much everything standard about the film industry today is true because of Jaws.

More specifically in terms of horror, the film spawned the inevitable rash of imitators: Piranha to Deep Blue Sea to this summer’s Shark Night. On land, we’ve had animal horror films like Anaconda and Lake Placid, and more and more of these imitators are drifting away from any real attempt to scare the audience  in favor of going for shock and laughter. Cinematically, Jaws has two thriving descendants today: the way you see any movie, regardless of genre, and the made-for-TV monster goofs SyFy shows on Saturday nights.

In the mid-70s, a name that would become synonymous with fear first made its mark, and tomorrow we’ll look at the first movie made from his first published novel: Stephen King’s Carrie.