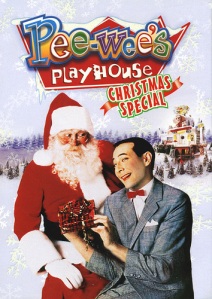 Plot: As Pee-Wee Herman (Paul Reubens) makes out his list for Santa Claus, he gets a visit from his friend Miss Yvonne (Lynne Marie Stewart), who has strategically placed mistletoe into her hairdo to get kisses from everyone. She’s brought Pee-Wee his Christmas present: her own homemade fruitcake. Less than enthused, Pee-Wee gives her a bottle of homemade perfume that smells just like him. As he continues his preparations, he gets a call from Whoopi Goldberg, asking to be on his Christmas special, but he’s booked solid for the next two years. When he’s reminded that he forgot to get decorations for the Christmas party, he wishes he hadn’t been so selfish, getting the attention of Jambi the Genie (John Paragon). Pee-Wee uses Christmas to con an extra wish out of Jambi (he usually only gets one a day) and has the Playhouse quickly decorated, planning to use his other wish for “something special” later. Mail Lady Reba (S. Epatha Merkerson) arrives and Pee-Wee gives her a set of press-on toenails and an enormous letter to Santa. She gives him another fruitcake, and a huge box containing singer Grace Jones, who was supposed to be shipped to the White House. She sings her own rendition of “Little Drummer Boy” before she’s reboxed and sent off to Washington (where I’m sure President Reagan was highly appreciative). Frankie Avalon and Annette Funicello stop by to make Christmas Cards, and Cher drops in to get today’s Secret Word. (It’s “Year.” So whenever anyone says “Year,” you scream real loud. You know where this is going.)

The King of Cartoons (William Marshall) drops in with a gift for Pee-Wee (two fruitcakes), and Annette starts the cartoon, preceded by a Christmas message from Joan Rivers on the set of Hollywood Squares. The excitement is heightened when a snowfall sends Pee-Wee out to play (after telling Frankie and Annette they can’t join him until they finish making their cards). As he plays, his friend Cowboy Curtis (Laurence Fishburne) stops by, and the two of them listen while the Del Rubio Triplets perform “Winter Wonderland.” Little Richard joins the gang as they go ice skating, but he’s not that good on skates, and has to watch as Pee-Wee demonstrates his own prowess, courtesy of his stunt double, Hans. Everyone goes in for hot chocolate to warm up and listen to a song by special guest k.d. lang, backed up by the Puppet Band. As night falls, Pee-Wee hangs up his giant Christmas stocking(s) amidst those of his friends, then tosses Frankie and Annette bread and water to sustain them as they toil away on the cards. Pee-Wee gets more visitors, more well-wishers, and more fruitcake… even, courtesy of Charo, one in Spanish. Pee-Wee’s friend Mrs. Rene (Susanne Kent) stops in to teach him about Hanukkah and gives him eight days of fruitcakes. Finally, Frankie and Annette finish making the 1000 cards, and are allowed to join the party. Randy, Pee-Wee’s Marionette buddy, seems to have forgotten the true meaning of Christmas, so the Magic Screen shows him a video of a Nativity Play and tells him the story of the first Christmas. “Touched,” Randy gives Pee-Wee a fruitcake. Finally, Pee-Wee leads them to a new wing of the Playhouse where he has a couple of construction workers building walls using the fruitcakes for bricks. As the gang begins caroling, Pee-Wee hears sleigh bells – Santa Claus has arrived! Santa (Aaron Fletcher) pops in and tells Pee-Wee his list was so big that he didn’t have any presents for the other children. Pee-Wee’s friends, with the help of his flashback to Randy, convince him to sacrifice his presents so the other children can have Christmas, and Santa rewards him by inviting him to join him on his sleigh to deliver the presents. Before he goes, Jambi reminds Pee-Wee of his special wish, which he uses to wish for Peace on Earth, a Merry Christmas, and a Happy New Year.

And everybody screams real loud.

Thoughts: If you were around in the late 80s, and were just at the right age, you might remember Pee-Wee’s Playhouse as something of a phenomenon. It was an odd sort of show. To kids, it was a bizarre, surreal blend of puppetry, animation and sketch comedy that tapped into a primal source of humor for us all, a sort of subversive answer to Sesame Street that seemed to want to use the same tricks, but instead of teaching us to spell and count, taught us to scream real loud. To adults, it was a weird production that was half parody and half celebration of the sort of kid-centered variety show that existed in the 50s and 60s, but was largely extinct by that point. To everybody, it was something that would prove impossible to forget even after Paul Reubens was forced to retire the character in disgrace. (We won’t go there, this is a family countdown.)

As an adult, it’s hard not to look at this and immediately understand that Pee-Wee creator (and performer) Paul Reubens was in this more to entertain himself and the older audience, and any kids who really got into it were just a little extra credit. If you doubt that, look at the guest list for this special. Find one seven-year-old circa 1988 who either knew or cared who Dinah Shore, Charo, or the Del Rubio Triplets were. Come on. I’ll wait. Most of the older guests seem to be wallowing in their own irony – particularly Frankie and Annette, who were riding an irony-fused wave of nostalgia popularity at the time. Only k.d. lang really seems to get into it, performing a wild and ridiculous rendition of “Jingle Bell Rock” that clearly demonstrates that she realizes how crazy what she’s doing is and has decided to just roll with it.

Pee-Wee himself, as a character, is hardly the role model of a Charlie Brown or a Rudolph… or even a Fat Albert. He’s kind of rude at times, openly disdainful of the gifts his friends give him, engages in a weirdly antagonistic back-and-forth with the viewers, and comes across as rather self-centered even at his best. It’s actually part of the reason kids liked him so much, I think – he was a more cynical character and, as a result, a slightly more honest one.

Even the bits that you usually get in a children’s show have a weird sort of twist. The scene where Frankie and Annette make Christmas Cards, for example, is the kind of quasi-education craft segment you’d get in any kids’ show… so why does Pee-Wee look at the former supercouple as if they’ve fallen from another planet? (Because that’s what most kids would do when some grown-up starts rambling about trying to make Christmas Cards with a potato, that’s why.) Perhaps the best “tip,” though, comes when Pee-Wee plays in the snow, and tells the kids at home that they can substitute 20 pounds of coconut shavings if they don’t have any snow at home. You’ve got to wonder how many kids tried to convince their parents to let them give that one a try.

Although this is billed as its own standalone special, even more than many of the others we’ve watched, it feels very much like a longer episode of the TV show. Reubens and his guests engage in most of the once-an-episode bits that we’re all used to from the weekly series, like his journey through the magic screen or his daily wish from Jambi the Genie. As was true for most episodes of the TV show, the plot is loose at best, with Reubens and company instead pinwheeling from one segment to another with no real logic or connectivity beyond the need to discuss Christmas and keep up the running gag about Pee-Wee getting fruitcake after fruitcake instead of real gifts.

It’s entertaining, at least, but perhaps not as much as a lot of the other Christmas specials we’ve watched this month. It has its charm, but Pee-Wee doesn’t really age as well as a lot of the other characters who’ve come together to make our Yuletide merry. Ah well. Perhaps the next cast of misfits will do better.