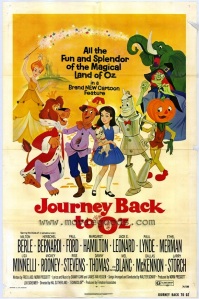 Plot: In this animated kind-of sequel to the 1939 MGM film, a storm is brewing in Kansas again, and Henry (Paul Ford) is getting worried. His niece Dorothy (Liza Minnelli) feels a-tingle, remembering  how a similar storm once swept her away to the land of Oz, but her Aunt Em (Margaret Hamilton) swears to her that Oz is simply a figment of her imagination. As she sings to Toto about wishing to return, a cyclone snaps the two of them up and pulls them into the air. When Dorothy comes to her senses, she realizes she’s landed by the Yellow Brick Road in Oz, and rushes off to find her old friends in the Emerald City. Setting off, Dorothy encounters a creature with a pumpkin for a head (Paul Lynde). Pumpkinhead is fleeing from an evil witch named Mombi (Ethel Merman), who created him to help her conjure some powerful, terrible work of magic. Dorothy tells Pumpkinhead to come with her to the Emerald City, where her friend the Scarecrow will help him.

Dorothy finds Mombi’s hut, where a crow (Mel Blanc) invites her to peek at the cauldron simmering on the fire. Mombi traps her and reveals her brew will create an army of green elephants to conquer Oz and destroy the Scarecrow. When Mombi leaves to get firewood, Pumpkinhead sneaks in and rescues Dorothy. As they escape, they encounter a carousel horse called Woodenhead (Herschel Bernardi), stuck upside-down in the ground. They free him and he joins their party.

Arriving at the Emerald City, they warn the Scarecrow (Mickey Rooney about Mombi’s attack just as the Witch and her Green Elephants arrive. Dorothy and her friends climb on Woodenhead’s back, but Toto and the Scarecrow are captured in the escape. Dorothy, Pumpkinhead and Woodenhead set out for Tinland, to enlist the aid of her old friend the Tin Man (Danny Thomas).  At first he’s eager to help, but loses heart when told of the army of elephants. The Cowardly Lion (Milton Berle) initially puts on a show of bravado, but quickly reverts back to quaking when told of the elephants. Glinda, the Good Witch (Risë Stevens) who has been watching the proceedings with her… “Glinda-Bird”… arrives to offer her aid, and gives Dorothy a package which she warns her not to open until she arrives at the Emerald City.

Mombi sends a group of enchanted trees after the friends, but Glinda – watching through the Glinda-Bird – gives Pumpkinhead a magic axe that turns them into… well… hippies. Saved, they return to an Emerald City that has rapidly fallen into decay. They are attacked by an elephant, but Dorothy opens Glinda’s box and a swarm of magic mice pop out and chase it away, freeing them to assault the palace. The mice make it to Mombi’s chambers and chase her the gardens, where she disguises herself as a rose bush. The mice have sent the elephants on a stampede, though, and she is trampled flat. Toto, recognizing Mombi’s true form, leads Dorothy to the flattened rose, who blames Dorothy for her fate just as she dies. As she withers, the elephants fade and the Emerald City is restored to its former glory. The celebration is short-lived, though, as Pumpkinhead has fallen along with the rest of Mombi’s creations. Glinda tells Dorothy her magic cannot restore him, and Dorothy weeps for her fallen friend. As she cries, her tears touch Pumpkinhead’s face, and the magic of her love restores him to life. The Scarecrow awards his friends, making Woodenhead his own royal steed and knighting Pumpkinhead, then offers Dorothy anything she desires. She asks, as always, simply to return home.  The Scarecrow find a loophole in the Oz Constitution that will only allow Dorothy to return home the way she came, and Glinda creates a cyclone to carry her back.

Thoughts: In the 1970s theatrical animation could be divided pretty squarely into two categories: Disney, and everything else. This Filmation effort falls into the latter category: limited animation, competent but unimpressive voice acting and weak music. The idea of doing an Oz sequel was all well and good, but Filmation went with stunt casting (Judy Garland’s daughter voicing Dorothy, original Wicked Witch Margaret Hamilton doing a cameo as Aunt Em, plus several celebrities of the time) and an uncredited rewrite of Baum’s second Oz book, The Marvelous Land of Oz. This movie plucks some of the characters from that book – Mombi and Pumpkinhead – turns the Sawhorse into a Merry-Go-Round horse, then turns the plot into something that’s trying hard to be The Wizard of Oz all over again. Instead of that other story, in which a young boy named Tip and his friends wind up stumbling on a plot to conquer Oz by an army of angry women, this movie has Dorothy once again marching to the Emerald City, once again picking up unusual friends along the way, once again being plagued by a Wicked Witch out for revenge. It’s incomprehensible to me why, with 14 Oz books to choose from by Baum alone, filmmakers never seem to look past the first three for inspiration, and often try to shoehorn elements from the latter two into the mold of the first one all over again. It’s equally baffling why they would create new elements when the originals (such as General Jinjur’s all-girl army, which the elephants are standing in for) work so much better. And for Heaven’s sake, why elephants? Okay, they’re big, they’re powerful, but the way the Tin Man and Cowardly Lion react to them you’d think elephants are their natural predators or something. Even mammoths might make sense, but the Tin Man going into a panic over green elephants simply doesn’t make any sense.

The performances, as I said, are merely adequate. Liza Minnelli is clearly cast simply for the gimmick of having her take up her mother’s role, as she brings nothing to the part. She’s not terrible, but there are most certainly more talented voice performers who could have done more, granted the character the sweetness and innocence she demands. As it is, the only thing that really can be said about Dorothy in this film is that she “kinda sounds a little like Judy Garland.” The animation is weak as well – Filmation does a far better job with the non-human characters than Dorothy. She’s surrounded by characters like the Tin Man and Pumpkinhead, which at least look amusing, but Dorothy herself is a stiff, unemotive creature that only really has one expression. This isn’t one of those times where I’m willing to chalk it up to the limited resources of the time, either. If Disney could make magical, powerful characters in the 1930s, the only excuse for the poor animation of the 70s is pencil-pushers cutting corners, and that I refuse to forgive.

Some of the other characters are better, at least. Milton Berle as the Cowardly Lion and Mickey Rooney as the Scarecrow fit the parts nicely. Danny Thomas’s Tin Man is less impressive, and Paul Lynde… well, he’s pretty much Paul Lynde talking out of a Jack O’Lantern. Ethel Merman’s Mombi isn’t bad at all, but she’s playing a typical, stereotypical witch, not particularly doing anything innovative. But my biggest problem with them is more along the lines of characterization than animation. The notion that the Tin Man or Lion would ever refuse to help Dorothy is preposterous. Hell, the entire point of the Lion’s story arc in the first book (or movie) is that he will always overcome his fear to help his friends! You mean to tell me you wave a little thing like an army of magic green elephants in his face and the king of beasts will lose his ability to fight? Absolutely not, my friends. I cannot accept this. The scenes with the Tin Man and Lion ultimately have no impact on the plot anyway, they’re included simply so that the recognizable characters could put in an appearance. It would have been just as effective and far less insulting, from a story standpoint, if the movie skipped from the escape from the Emerald City to the point where Glinda pops up. (It would actually be better, in fact, because if Glinda was watching the whole time, why the hell did she wait so long before taking action?)

Speaking of Glinda, here we see one of those oft-used fantasy tropes that usually irritates me: the “don’t open it until the proper time” gimmick. Writers often use this to create some false suspense, but at least they usually make some effort to explain why the giver of the gift won’t say what it is: magic, arbitrary rules of the game, “you wouldn’t have believed me,” something. None of those are brought into play here, though, there was no reason for Glinda to make a secret out of the box’s contents. It’s just there so we can have a brief moment in the forest where Woodenhead suggests opening the box to escape the trees and Dorothy can tell him no, reminding us that she’s a good little girl who does as Glinda tells her.

The songs, like the voice acting, are merely adequate. Each character gets at least one, Dorothy gets several, none of them are particularly memorable. This was par for the course for films of this nature, sadly, and that’s even sadder when you compare it to the incomparable music from the 1939 film.

When I learned of the existence of this movie, I was initially very excited – as I always am when I find out about a version of Oz I haven’t encountered before. Sadly, the whole thing fell very flat for me. It was at least more recognizable than the 1925 Wizard of Oz, but in truth, that’s mostly because it was built on the back of the Judy Garland film. That’s not to say you can’t tell a good Oz story that way – many people have – but this didn’t hold up for me. Still, I can see a lot of similarities to the cartoons I grew up watching, the ones that hold a special place in my heart even today. On the other hand, I can also recognize that a large number of those cartoons I loved as a kid are terribly weak when looked back upon with a discerning eye. I suspect that if I had watched this movie as a child, I’d probably upon it with rose-colored glasses. As it is, I’m just left sliding the disc back into its NetFlix sleeve and feeling a little disappointed for the second time in this week’s experiment.