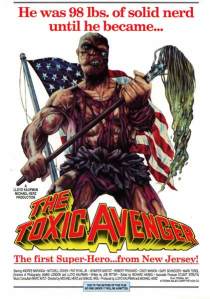 Plot: Welcome to Tromaville, a small suburb of New York City, and the number one dumping ground for toxic chemicals in America. Melvin Ferd (Mark Torgl) the janitor at a local health club, is constantly tormented by a group of club members, including Bozo (Gary Schneider), Slug (Robert Prichard), Wanda (Jennifer Babtist), and Julie (Cindy Manion). They decide to teach him a lesson, with Julie luring him into a locker room just as a truck full of exposed barrels of toxic waste parks outside. She tricks him into putting on a pink tutu and poka-dotted leotard, and he is humiliated in front of the club’s customers, fleeing through a window and landing in the toxic barrels. People continue to mock him as the chemicals burn through his skin and Melvin, now burning alive, stumbles home and sits in a cold bath, where he transforms into a hulking brute of incredible size and strength.

A group of drug dealers, meanwhile, try to buy off a cop (O’Clancy, played by Dick Martinsen) who refuses to cooperate. Before they can castrate him with his own gun, a huge man (Mitch Cohen, voiced by Kenneth Kessler) appears and savagely kills two of the criminals (well… kind of savagely, the fight itself is actually played mostly for laughs), leaving a mop across their faces. Mayor Peter Belgoody (Pat Ryan Jr.) is horrified by the murders… mostly because the dead criminals were some of the best dealers in his employ.

The Monster – a mutated Melvin, of course – shocks his own mother into a dead faint. Despondent, he makes his way to the Tromaville garbage dump and constructs a crude home for himself there. Later, a group of criminals robs a Mexican restaurant, killing a bystander and a seeing-eye dog belonging to a blind woman named Sarah (Andree Maranda). The crooks’s leader, Leroy (Patrick Kilpatrick) is preparing to rape her, when the Monster Hero appears and fights them, ripping an arm off the would-be rapist and sending the customers fleeing in terror. The Monster beats the crooks and finishes them off in the restaurant’s kitchen. He goes to the sobbing Sarah and she begs him to help her home, where they begin to become friends. Given new confidence, Melvin begins a one-man war on crime, battling pimps, drug dealers, and other criminals, and saving lives along the way. The newspapers begin to run stories about the “Monster Hero” of Tromaville. Belgoody sends his men to hunt the monster down.

Melvin and Sarah fall in love, and he takes her back to his junkyard hideout to live. He returns to the health club, attacking Julie in the locker room. Minutes later he finds Bozo and Slug, fresh from beating an old woman to steal her car. He hurls Slug from the car and sends Bozo through a series of crashes, burning him alive but leaving Melvin unharmed.

Things go bad when Melvin kills a little old woman in a dry cleaner’s shop, turning people against the Monster Hero. Ashamed, he goes home and tells Sarah the truth about who he is and what he has done. They decide to leave town, and Belgoody rejoices… until he discovers the old woman was the leader of a slavery ring. Belgoody covers it up and sends the cops out to hunt the Monster. They find him and Sarah in the woods, and the town assembles outside their tent, torn between people who want to protect the monster and Belgoody and his men who want to kill him. The townspeople stand in front of Melvin to protect him, soon joined by O’Clancy and the rest of the cops. Belgoody opens fire, but the bullets bounce off Melvin. He stalks Belgoody to his limo and rips his guts out, literally. The townspeople applaud the vicious murder, Melvin kisses Sarah, and all in Tromaville is well once again.

Thoughts: It would be impossible to get through a month of horror/comedy without touching upon the films of Troma. Lloyd Kaufman’s legendary low-budget B-movie studio has become synonymous with campy sci-fi and monster flicks, and how better to represent them than with this, their flagship property?

Buoyed by the likes of Attack of the Killer Tomatoes, Lloyd Kaufman and Michael Herz built this film (and, for that matter, their entire film studio) on the premise of the “So Bad It’s Good” movie. Whereas older movies – the sci-fi and horror clunkers of the 50s and 60s – made an earnest attempt at making good movies and simply fell short, Kaufman has no such delusions. From the beginning of the movie the acting is terrible, the script laughable, and the special effects and graphics absurdly cheap, even by 1984 standards. Watch the quality of this film compared to Ghostbusters and you’d swear that Toxie’s debut is at least ten years older, instead of both films coming out in the same year.

The film’s absurdity doesn’t just come from the effects and acting, though. Kaufman sets out to be as deliberately offensive as possible. There’s an early scene where one of the punks and his girlfriend recite a litany of racial slurs and other negative stereotypes, ranking them on a point system for running them over with a car, before finally deciding to target a kid on a bicycle (children under 12 being worth maximum points). They hit the kid once, then back over him to crush his head, stop, and take pictures. The sympathies of the audience are swinging wildly at this point. You hate the gang for doing it, which is how you’re supposed to feel, but by the time the girls whip out the Polaroid camera, you’re pretty much ready to hate the filmmakers as well.

Our hero, ladies and gentlemen…

(It is worth noting, at this point, that the Toxic Avenger films eventually spawned a children’s cartoon show. I doubt most of the moms who let their kids sit through it would have been thrilled if they saw this particular sequence.)

Kaufman actually triples the genres he plays with here. His heavy layer of goofy comedy is draped over a plot that draws upon nuclear-mutant themed monster movies and wraps it around the skeleton of a superhero origin story. No superhero has ever been so ridiculous, though – even the drivers of the truck that gives us the “toxic” part of the hero’s name comment on how ridiculous it is for them to drive around with open, sloshing barrels full of chemical sludge. Belgoody is also an extreme stereotype of a villain. It’s hard to believe even the most corrupt politician in a serious film would think he could get away with dumping toxic chemicals literally twenty feet away from the city’s drinking water. Even Belgoody’s gang is comical – it’s a patchwork of stereotypes, containing a street hood, a Capone-style gangster, and representatives of just about every crime stereotype there is. The notion is preposterous enough to remind us that this film takes place in, at best, an exaggerated reality, where all of the elements that make up monster movies and superhero films have been amplified to a ridiculous degree.

At times, the movie starts to outsmart itself. The toxic reservoir scare, for instance, is played up as though it will be a major plot point, perhaps even the Big Evil the hero will battle in the film’s climax. That isn’t what happens, though – it’s mentioned once and then abandoned as Belgoody’s resources are turned exclusively towards seeking out the monster. Most of the villains are portrayed as one-off as well – the theatrical mob Leroy leads is all killed right away, for example. Even the moments where Melvin confronts his tormentors seem like they’re worked in simply to tie off those dangling threads while we’re waiting to get back to the real plot, such as it is.

Kaufman picks up on a lot of sources, with Melvin’s transformation smacking of the Incredible Hulk and his relationship with Sarah echoing both the friendship Frankenstein’s monster shared with the blind (Gene Hackman in the Mel Brooks version) and the longtime romance in the Fantastic Four comics, in which the mutated Thing finds love with blind sculptor Alicia Masters.  He even picks up on a few slasher tropes – Melvin’s fatal confrontation with Julie comes complete with a silhouette shot of the monster approaching her with a pair of menacingly raised scissors. It sends images of Freddy Krueger and Jason Voorhees across the brain, until you remember that this is your hero.

Sarah takes us to the extremes of broad comedy, knocking over an entire rack of canes and smacking Melvin accidentally, playing up on pretty much every joke you could think of making about the blind. Although not as bad as the scene with the racial slurs, this starts to tread close to the line of being offensive as well. And true to form, Kaufman doesn’t care at all. In a way, it’s almost a liberating thought. When you see so clearly that you’re dealing with somebody who doesn’t give a damn what you think of him, you manage to stop giving a damn and concentrate more on the actual content of what you’re watching.

Is it cheap? Yes. Is it exploitive? Oh yeah. Is it ludicrous? To be kind. But like the makers of Attack of the Killer Tomatoes, Lloyd Kaufman and his Troma team have never attempted to take themselves seriously. They know what they are, they know what their audience expects, and they deliver it as effectively (and as cheaply) as they possibly can. It will never make for great cinema, but nobody can deny that this is a film studio that consistently meets its goal, artistically. It’s easy when you set the bar so low.