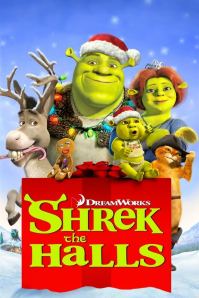 Plot: With only 159 days left until Christmas, Donkey (Eddie Murphy) begins pestering his friend Shrek (Mike Myers) to begin the preparations. Over the next few months, Donkey gets more and more insistent and Shrek more and more resistant, until it’s finally December 23 and he realizes for the first time his wife, Princess Fiona (Cameron Diaz), and their triplets are looking forward to their first Christmas as a family. Not wanting to let her down, Shrek sets out for town to figure out how to “make a Christmas.” He winds up with a copy of a self-help book, Christmas For Village Idiots, that promises to help him one step at a time make the holiday Fiona deserves.

The next day, Christmas Eve, Fiona wakes up to find Shrek decorating their house for Christmas. Although she’s happily surprised, Donkey shows up to drop off a Christmas card and criticizes the decorating job. Fiona and the babies pitch in, and by dark Shrek is ready to sit down and tell his kids the Christmas story, but he’s interrupted when Donkey bursts in along with all of their friends. Puss in Boots (Antonio Banderas) entertains the kids while the others race around putting up more and more decorations, ruin supper and – in the case of the Gingerbread Man (Conrad Vernon) – make a pass at the angel-shaped Christmas Cookies. Although Shrek tries to hide from the chaos, Fiona lures him back, but things just get worse. He tries to get himself back into the spirit by telling his kids his Christmas story, but Donkey again steals the spotlight with an insane poem about a Christmas parade. Puss in Boots gets into the act with his tale of “Santa Claws,” and the Gingerbread Man jumps in with a story that’s really more appropriate for Halloween. A fight ensues and Shrek, while trying to hide his book, accidentally starts a chaotic chain reaction that ruins the party and sets both himself and the Christmas tree on fire. Boiling with rage, he throws Donkey and the rest out of his house. Fiona is upset that he threw out their friends, and sets out to find them while Shrek complains about how they ruined “his” Christmas. He catches up to them and tries a halfhearted apology, finally admitting that ogres don’t celebrate Christmas, and he has no idea what he’s doing. Everyone apologizes to each other and the odd little family returns to Shrek’s home to settle in for the night. Before lights out, Shrek tries once more to tell his Christmas story: a tale of a Santa Claus making his visit to an ogre home. As he finishes, they hear laughter in the air and rush outside to see Santa Claus flying across the moon.

Thoughts: My thoughts about Dreamworks Pictures Shrek franchise are fairly simple: I thought the first one was entertaining. As for the rest, my grandma always said if you can’t say something nice, don’t say anything at all. But even the worst franchise can sometimes turn out a charming Christmas story, so when Shrek the Halls made its network TV debut, I gave it a chance, and I rather liked it.

In truth, it suffers from many of the problems that plague Dreamworks Animation in general – too many topical jokes and current songs that hurt the special’s ability to become a real timeless classic. There’s a reason Rankin and Bass didn’t throw the Beatles into their specials… well, they also probably couldn’t afford them, but you see my point. In truth, this and oversaturation is one of the reasons Dreamworks will never quite reach the heights of a Pixar or Disney Animation Studio – they’re so focused on making a franchise that’s current and modern and now that the next generation of children will find themselves tuning out to the constant reminders of the world their parents grew up in. To put it another way, my two-year-old niece loves every Toy Story movie (and, in fact, everything Pixar has produced). I find it really hard to believe that she’ll latch on to Shrek or Kung-Fu Panda in the same way, even once she gets a little older and enters into the sphere of the intended demographic. They also rush out sequels, cranking out cookie-cutter cartoons that rarely, if ever, match the original, rather than allowing the story to dictate the future of the characters. Finally, there’s an emphasis on gross-out humor (such as the Gingerbread Man throwing up a chocolate kiss and the Donkey eating it) that shuts out older viewers… something else Pixar doesn’t feel the need to succumb to.

But don’t get the impression that I didn’t like this cartoon – I did. The animation itself is top-notch, and a lot of the characters and design are very imaginative… the giant Waffle Santa Claus, for instance. Puss in Boots is a great character, especially if you’re a cat owner and recognize how easily he slips from the persona of the suave Latin lover into a typical feline, which leaves him embarrassed.

Like any good Christmas special, the true test comes in when the hero learns his lesson at the end. Shrek has an interesting character arc here – he goes from being a complete Scrooge to suddenly wanting desperately to create a good Christmas for his family. From there he bumbles, he misunderstands the meaning of Christmas, he learns it, and then gets it all right. This time around, rather than giving a religious message or a message about the virtue in giving and sacrifice (all of which are well and good, by the way), the message is one of family. You may fight and struggle and drive each other crazy, but there’s a reason you stick around people besides blood. It’s a nice message about love and the truth about what a real family is, and it’s one even the children will no doubt be able to grasp.

Throughout most of the 90s and early 2000s, there was a dearth of new televised Christmas specials, which is why this particular Reel to Reel project has been so heavily weighted with films from the 60s through the 80s. (In a way, it’s the exact opposite of the problem I had with Lunatics and Laughter.) But in recent years, Dreamworks and Disney both have stepped up and started to change that. Have a wonderful Christmas Eve, my friends, and come back tomorrow for the finale of The Christmas Special with my favorite TV Christmas Special to premiere since I was a child.

Posted in 3-The Christmas Special, Comedy