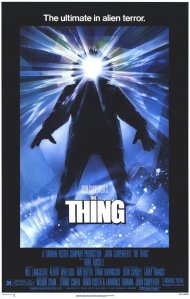 Writer: Bill Lancaster, based on the story “Who Goes There?” by John W. Campbell

Plot: An American antarctic research station is rocked when a Malamute dog rushes onto the base being pursued by a Norwegian helicopter, whose pilot is throwing explosives at the dog. The helicopter lands, but one of the two men on board fumbles with an explosive, blowing up himself and the helicopter. The remaining Norwegian opens fire on the dog, injuring one of the Americans, and is finally brought down with a bullet to the head fired by the base commander, Garry (Donald Moffat). Base pilot R.J. MacReady (Kurt Russell) and doctor Dr. Copper (Richard Dysart) decide to take their own helicopter to the Norwegian base to investigate what happened, while the rest of the Americans adopt the abandoned Malamute. Arriving at the Norwegian base, they find it devastated – burned, holes blown in the sides, an axe embedded in the wall and more. They also find a strange organism frozen in ice and another strange, semi-humanoid body burned to a husk. They bring the burned body back to their own base so Dr. Blair (Wilfred Brimley) can perform an autopsy, but all it shows is that its internal organs appear to be normal. As the Malamute begins to get underfoot, Clark (Richard Masur) puts it in with the other dogs. The Malamute suddenly transforms, its body splitting open and strange appendages attacking the other dogs. As Clark comes to investigate the barking, the dogs flee, and he sees the tendrils of the Thing. Seeing the creature, MacReady hits the base’s fire alarm and tells somebody to come with a flamethrower. He tries shooting the beast as it assimilates the other dogs, but part of it ultimately escapes by breaking into the ceiling. The flamethrower arrives and Childs (Keith David) burns what’s left of the monster.

Blair examines the body and declares it’s some sort of creature with the ability to absorb and imitate other life forms… and what’s worse, the Malamute was free to roam the base for a full night before it was kenneled. A film retrieved from the Norwegian camp shows a spot where they blasted a hole in the ice, and MacReady takes off to investigate. In the hole the Norwegians blasted, they find what appears to be an alien spacecraft, which could have been buried for over 100,000 years. Blair runs some computer projections on the creature’s reproduction rate and, calculating that it could take over the entire world in three years if it reaches civilization, kills the remaining dogs and sabotages the base radio and helicopter. The creature assimilates its first human, and the rest of the crew kills him, rounds up all the bodies, and torches them. While they try to clean up, they find Blair with a gun and an axe, holding off the rest of the crew. Once he runs out of bullets, they manage to overpower and sequester him, but he warns MacReady – watch Clark. Copper proposes testing each person’s blood to prove if they’re really human, but finds that the Thing (whoever It is) has destroyed the supply of untainted blood needed for the test. The men begin hurling accusations at each other, each suspecting the others of being the Monster in disguise. MacReady logically argues that they can’t all the disguised creature, and sequesters Garry, Clark and Copper, the most likely suspects, while Norris (Charles Hallahan) prepares to test them. With a storm approaching, a fuse is blown, Fuchs (Joel Polis) disappears and MacReady separates the crew into groups to search. They find Fuchs’ body, burnt, in the snow, and Nauls (T.K. Carter) finds some of MacReady’s clothes, shredded. He returns with dynamite and the crew debates his fate. In the middle of the standoff, Norris explodes into a creature, killing Copper. MacReady torches the Thing, but the question of who among them may be infected still hangs in the air. He orders the men to submit to a test, but kills Clark when he tries to attack. MacReady’s test is to draw blood from each person – including the dead – and burn it, having learned from Norris’s Thing that each piece of the creature will react. The test begins to exonerate people, including the dead Clark, but when he tests Palmer (David Clennon)’s blood, Palmer transforms into a Thing. MacReady torches It and blows up the body in the snow. The four remaining men – MacReady, Nauls, Childs and Garry, all test clean, and plan to go test Blair, but his shed is empty. They find a tunnel beneath, where Blair has been trying to reconstruct the alien ship. Realizing they can’t risk the creature surviving or even freezing again, MacReady declares they have to blow up the base, even at the cost of their own lives. After a final explosive confrontation, only MacReady and Childs remain. Sitting by the fire, waiting to freeze to death, they decide to wait… and see what happens.

Thoughts: Although a great number of the movies on my list have been remade at some point or another, this is the only time I’m going to discuss the remake of a movie in lieu of its original. John Carpenter’s film is far more faithful to John W. Campbell’s original novella “Who Goes There?” than the less-remembered 1951 Christian Nyby movie The Thing From Another World (which, you may remember, was the movie the kids were watching in Carpenter’s previous entry on this list, Halloween). I picked the remake for several reasons: it’s a better movie, first of all. It’s far more memorable than the original. And pretty much every cultural reference made to this story today is based not on the 1951 film, but on this 1982 outing. Simply put, people remember Carpenter’s film. They don’t really remember Nyby’s. Carpenter himself hasn’t turned out many impressive films in the last few years, but this and Halloween give him two very well-deserved spots on this list.

This is different from a typical horror movie in several ways, beginning with the setting. The Antarctic location is different enough in its own right (let’s not forget many of the films we’ve looked at lately have been set in the woods or suburbia), and the constant snow makes it look very different than any other film, even the similarly snowbound The Shining.

This is another one of the few entries in this experiment that crosses the line between science fiction and horror, but this is even easier to place in the horror camp than Alien was. Whereas that film is sci-fi through and through, its only the extraterrestrial nature of the monster that puts this movie in the science fiction category. Had it been supernatural instead – a change that could have theoretically been made without substantially altering the plot – the movie would be a pure horror romp. As it is, it fits in the horror category without any trouble.

Like the best horror, John Carpenter uses fear itself as the core of the movie. The fear actually doesn’t come from the unknown this time, though, but from the perversion of what is known. Before anybody realizes the true nature of the monster that threatens them, it’s already begun to infect the population of the camp. Suddenly any living creature – any of the dogs, any of your fellow researchers – may in fact be a monster in disguise (and this time in a far more literal sense than old Norman Bates was). That fear that something you know and trust can be perverted and turn on you is chilling under any circumstances… and even more so in a setting like this one, an Antarctic base where there’s no way to contact the outside world and no hope of rescue.

Of course, let’s not discount the effectiveness of a great makeup and puppeteering department either. The first inkling that we’re dealing with something inhuman is the corpse at the Norwegian base – a horrible thing that looks like two separate human bodies were somehow melting together. When we see the dog-creature actually alive, actually moving, it gets far worse. Sometimes, hiding the beast works better. In this movie, where the monster can perfectly imitate any lifeform, there’s not really a “true form” to reveal, so showing it in mid-transformation gives us a jolt of horror that carries us through when we start to wonder what – or who – has been subject to that very process. The Thing that bursts out of Norris is especially grotesque and powerful – it’s an ugly beast that has a very realistic way of moving (considering that its primary means of locomotion is an absurdly long tongue, anyway). But nothing is as mind-bendingly horrible as the creature’s final form, where it attacks MacReady as a sort of horrible biomass in which we can see the trace elements of the different people and beasts it assimilated over the course of the movie. These are the kinds of effects that you know – you know – most filmmakers today would try to create with CGI, and which wouldn’t be one iota as effective.

The new version of The Thing, released just a couple of weeks ago, I find somewhat odd. It’s not a remake of the remake, but supposedly a prequel that shows what happened at the Norwegian base, using all of the visuals Carpenter created in this movie as its blueprint. It’s not a bad idea, and I’d certainly rather see that than watch them try to remake this one, but why call it The Thing again? That’s just going to lead to confusion, my friends. This is why subtitles were invented. On the plus side, from my understanding the creators of the new movie are insistent on using practical effects – makeup and puppets – instead of relying on CGI, and for that at least, they’ve earned my respect. And quite possibly the price of my admission ticket.

Brr. I think we need to warm up tomorrow, don’t you? We’re going to leave behind the frozen waste of Antarctica for the warmth of hearth and home and a scorching boiler room… in a nice, quiet community where dreams are growing disturbed. We’re going to have a bit of a Nightmare on Elm Street.