On Gene Wilder, Why We Go to the Movies, and Why We Don’t 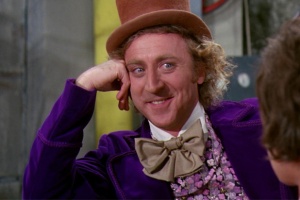 2016 will be known, among other things, as the year death became a serial killer targeting celebrities. The most recent, as least at the time that I’m writing this, was one of the ones that hit me hardest: Gene Wilder. Although his body of work was relatively small, the movies he made in his lifetime were some of my favorites: Young Frankenstein, The Producers, The Little Prince… and of course, the two films that AMC Theaters showcased this weekend, Willy Wonka and the Chocolate Factory and Blazing Saddles. When my wife, Erin, told me that they were going to play these films, I knew I’d married the right woman. She was as anxious to go as I was, even though unlike me, she’s not a huge fan of Blazing Saddles, which just goes to prove that marriage is about loving your partner even when they’re wrong.

Unfortunately, we don’t live in an area where there are a lot of small cinemas or retrospective houses, and the Fathom Events/TCM screenings of classic movies are usually on weeknights, when I need to get up early for work the next day. It’s not often that we get a chance to see an older movie on the big screen, and despite the increasing hassle that accompanies going to a movie theater, that’s still the best way to see a movie. I was immediately excited for this double feature. 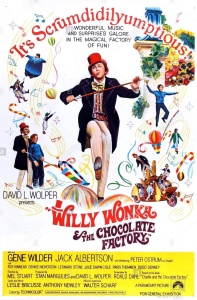 We filed in to see Willy Wonka at the 5 p.m. show. The theater was surprisingly full, and I would guess about 75 percent of the audience were parents and their children. You expect this with the latest Disney release, or whatever Dreamworks movie is currently featuring a rubbery character using the same facial expression as every other one, but it was a little surprising to see so many kids for Willy Wonka. Obviously it’s a movie that’s tailor-made for children, but it’s also 45 years old. I know from experience how difficult it can be to get kids to watch an older movie.

The lights went down, the film began, and within five minutes I was reminded of why I go to the movies.

Most of those parents with their kids were, I would guess, about my age or younger – which is to say, they were all born in the 45 years since this movie was originally released. Although I would guess that virtually every adult (and many of the children) in the theater had seen this movie, I would also guess that almost nobody in the room had seen it on the big screen before. (I myself remember vividly the first time I saw this movie: on one of those rolling TV carts they used to wheel around elementary schools on those days they needed to keep the kids quiet for a while.) The kids were enraptured. They laughed when Grampa Joe went through his antics of pulling himself out of the over-occupied bed. They gasped at the intimidating presence of Mr. Slugworth. They cheered when Gene Wilder, in all his glory, limped weakly from the door to his factory before performing a front flip at the gate and teaching them a valuable lesson: you can’t always trust an adult.

It was glorious. At least three generations of fans laughing and clapping and even occasionally singing along to a movie that predates any of us… all of us together. This is what you can never replicate at home. It doesn’t matter how big your TV, how expensive your sound system, how advanced your home theater setup might be, it’s no substitute for the shared experience of seeing a beautiful film with dozens or even hundreds of other people, glorying together in the whimsical ministrations of a genius like Gene Wilder.  When the film ended, Erin even reported she overheard a little girl having an existential crisis over the fact that Charlie had blonde hair instead of brown. Her mother finally asked her, “are you thinking of the movie with Johnny Depp?” And the child, adorably, said, “Who?”

This doesn’t happen when you’re watching a Blu-Ray. 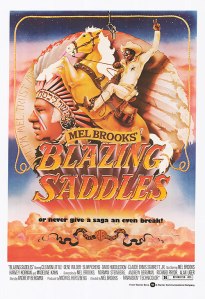 The movie ended and we filed out, allowed the theater staff to clean, and walked back in for Blazing Saddles. The families were gone now, replaced by adult fans. Blazing Saddles, if you somehow have never seen it, is a brilliant motion picture. Mel Brooks takes Wilder and Cleavon Little through an hour and a half of systematically dismantling racism and prejudice, while simultaneously cranking out one golden comedic moment after another. I’ve probably seen this movie ten times, but the jokes still land perfectly. And it is a testament to the brilliance of Brooks, Little, and Wilder that I still loved every frame of this movie despite the fact that the theater in which we saw it was littered with complete assholes.

You know who I’m talking about here. I’m talking about those people who pay money to sit in a movie theater and behave as if they’re on their couch at home. The ones who turn on their cell phones in the middle of the movie. The ones who keep kicking your seat. Worst of all, the comedians who think we want to hear them recite the jokes along with the movie. It’s one thing if you’re going to a screening of The Rocky Horror Picture Show or something else where audience participation is encouraged. But this was just a simple screening, not an event specifically structured for dedicated fans. You can’t take it for granted that everybody else in the theater has seen it before. For someone seeing a movie for the first time, someone reciting the jokes along with the movie is irritating. Someone saying the punchline a second before the movie is unforgivable. And reading the signs from the sight gags out loud should be punishable by being strapped into your seat and forced to sit through a two-day repeat marathon of The Oogieloves in the Big Balloon Adventure.

It was still a magnificent movie, of course, and it’s a shame that chances to see things like this are so rare. These days, making any movie is hard. Making a great comedy is almost impossible. People whose movie-going time is limited choose to spend their theater money on the big action pieces and special effects spectacles, figuring they’ll catch the smaller movies and comedies on Netflix. As a result, the smaller movies and comedies don’t make as much money, and as a result, they don’t make as many of them. The comedies that are made are picked apart and dissected from the script stage to the final cut. Spineless executives and bean-counters demand changes in the name of political correctness and appealing to increasingly-important foreign markets, which makes for an even bigger mess since – while an explosion is an explosion anywhere in the world – a joke that kills in Patterson, New Jersey will die on the vine if you try to tell it in China or Japan. So when the studios start giving notes, that’s the stuff that gets chopped.

Blazing Saddles, the masterpiece of 1974, wouldn’t stand a chance of being made in 2016.

The worst part of this, of course, is that comedies benefit more than any type of film by being seen in a theater. You can get hyped up by a superhero movie by yourself. Horror movies may be at their best when sitting on the couch cuddling someone special. But that’s not how comedies work. Laughter is infectious, my friends. One person laughing gives someone else permission to do so. Hundreds laughing is an epidemic of joy. Jokes that I’ve heard a dozen times, jokes that elicit the barest chuckle when I watch them on TV, had me splitting my guts when we watched them in the theater with other fans. It’s why going to a RiffTrax Live event is more fun than watching the digital download at home. It’s why I paid for my wife and I to watch two movies I already own on DVD. And it’s why, if my local theater decides to show Duck Soup, Abbott and Costello Meet Frankenstein, or History of the World Part I, I’ll be first in line.

Inconsiderate moviegoers aren’t enough to kill it, but they do diminish the joy of the experience, and that’s a shame. It says a lot that the children who joined us for Willy Wonka were, by far, better behaved than the adults who watched Blazing Saddles.

But the double feature did kindle something in me. I’ll be on the lookout for those classic screenings more often now. And when a true masterpiece hits the screen, even if it’s something I’ve seen a hundred times, I’ll do my best to be there.

While I have your attention, friends, I’m gearing up for a new Reel to Reel project. This time, in a deliberate effort to distract myself from all the misery in the world, I’ve decided to write about the most important comedies of all time.

That begs the question, of course, what ARE those?

I’m not just talking about the FUNNIEST movies, although of course the films that make the cut should certainly be that. I mean the most IMPORTANT comedies — those that have left the deepest cultural impact, that influenced the future generations the most, that started trends, that launched the careers of the greats. So I ask you, using those criteria, what movies should make the cut? I’ve started a poll in the Facebook group for the All New Showcase podcast, and I’d like to invite you all to help me create my list. Please, vote for as many movies as you want, and feel free to add as many options as you like.