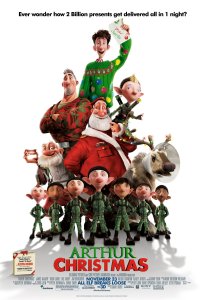 Note: If you’re new to Reel to Reel, I’m more about dissecting and commenting on film than writing a straightforward review. As such, please be warned, the following is full of spoilers.

Plot: St. Nicholas of Myra, as we all know, is Santa Claus… or at least, the first Santa Claus. Over the centuries, his descendants have taken on the job, one after another. And now, after 70 years, Santa the 20th (Jim Broadbent) is ready to pass the torch down to his son, Steve (Hugh Laurie). While Steve runs a whip-smart, high-tech operation with military precision, Santa’s other son Arthur (James McAvoy) delights in the more joyful elements of the season. Santa is getting old, though, and in fact, Steve is largely running the show already, while his little brother – although enthusiastic as anyone could be – is mostly getting in the way.

Returning home, Santa is expected to announce his retirement and Steve’s first year on the job, but instead says he’s looking forward to his 71st mission next year. The tension gets worse when the elves discover Santa failed to deliver a single present – a bicycle for little girl named Gwen (Ramona Marquez). Steve convinces his father it’s too risky to try to deliver the last present before sunrise. Arthur, however, refuses to accept this. He and his grandfather, Santa 19 or “GrandSanta” (Bill Nighy) hop into an old-fashioned sleigh with old-fashioned flying reindeer to bring Gwen her present before she wakes up. They soon find a stowaway – a wrapping elf named Bryony (Ashley Jensen) – who joins them.

GrandSanta soon runs into trouble navigating a world that has grown and changed since his last flight 70 years ago. Their route from the North Pole to England has them cause havoc in Toronto and cause an alien sighting in Idaho before setting down in Africa, where Arthur just barely saves them from being eaten by lions. He’s discouraged when he realizes GrandSanta is more concerned with reclaiming his own past glory than giving Gwen her present. Landing in England, he and Bryony set out to find Gwen’s house. When they arrive, they find they’ve screwed up again – they aren’t in England, they’re in Mexico.

At the pole, Steve sees news reports about the chaos being caused by his brother and grandfather and the elves confront Santa and Steve about skipping a child. Santa and Mrs. Claus (Imedla Staunton) set out to find Arthur and deliver the present, but Steve again has to take the controls. After a detour to Cuba, Arthur manages to recover the sleigh, and the Clauses all race to England. The governments of the world scramble to face the “flying saucers” they’ve been spotting all night, and GrandSanta provides a distraction so Arthur and Bryony can get away with Gwen’s gift.

With three minutes to sunrise, Arthur races to deliver the present. Arthur, Steve, Santa and GrandSanta all arrive at Gwen’s house, where the latter three begin to argue over who gets to leave the present. When Arthur breaks up the fight insisting it doesn’t matter who does it, they realize that it’s Arthur who should do it. They hide and watch Gwen open her present, Arthur wide-eyed with joy, and Santa and Steve realize the mistake they’ve been making all along. One year later, Steve has been made executive coordinator of North Pole operations, Santa – Malcolm – joins his father in retirement, and Arthur has taken up his natural place as the new Santa Claus.

Thoughts: Like The Santa Clause, this movie takes the Santa Legacy trope and runs with it. Produced by Aardman Animation (the company known for the marvelous Wallace and Grommit films and the sublime Chicken Run), Arthur Christmas reimagines the Santa legend with a weird blend of fantasy and high-tech science. The modern Santa and his elves, for instance, travel not so much in a classic sleigh, but in a cloaked vessel that resembles an enormous flying saucer, and although Santa the 20th is on the ground, the Elves themselves are responsible for much of the gift delivery, milk and cookie removal, and so forth. An early sequence shows us this gift run over a city, as the elves take on pretty much the whole job for the aging Santa. The sequence is actually very similar to the Disney TV special Prep and Landing, which predates this film by two years, and I’ve got to wonder if that’s strictly speaking a coincidence.

As I’ve said before, the Santa Legacy thing isn’t exactly my favorite trope. I can’t wrap my mind around eliminating that part of the magic of the mythology while keeping so much of the rest of it. That said, Arthur Christmas is probably the film I‘ve seen that uses that idea to its fullest potential. By making Santa’s task a largely sci-fi operation, they minimize the fantasy element, making the loss of immortality slightly easier to accept. (This goes out the window, of course, when GrandSanta unveils his old sleigh and the magic reindeer that pull it, but what are you gonna do?) I also appreciate the fact that, for once, we don’t have a stale old story about the chosen one rejecting the call. Steve, the intended Santa, is fully prepared and capable of taking on the job. Arthur, our hero, doesn’t expect the job, and never for an instant shows any sort of anger or resentment over the fact that Steve is next in line to become Santa Claus instead of him, but from the very beginning shows the love and enthusiasm you want from your Santa. There’s no problem believing he would have leapt at the chance, had it really been presented to him earlier in his life.

The casting in this film is pretty effective. As an animated feature, of course, the focus is on the voice acting abilities of the cast rather than their look, and the four Santas we deal with fit pretty well. Broadbent as the current Santa has a sort of soft-spoken attitude, but comes across as just a little daft and ineffectual. Bill Nighy brings in the sort of wild, manic energy he usually produces to perfect effect as GrandSanta. Hugh Laurie isn’t soft and fluffy at all, but he still manages to create a stoic, cynical character without simply echoing his character from House. And then there’s James McAvoy as our hero – the youthful charm and exuberance in his voice is perfect, to the point where you’ve got to wonder if they modulated his voice up a half-octave or so.

Aardman Animation made its mark with stop-motion animation, and I admit to being a bit disappointed when they started doing CGI work, but I have to admit the animation in this film is gorgeous. The EVE – GrandSanta’s old sleigh – is a thing of beauty, something that the viewer falls in love with as purely as Arthur does. The character design is pretty good too – the human characters each have a distinct look, even as the members of the Santa family bear enough similar elements to accept them as being relatives. There are action scenes here – like Arthur’s oceanic recovery of the runaway sled – that I just can’t imagine being as thrilling in stop motion, even the best stop motion. And the design work is simply charming. One of my favorite touches is Steve’s beard, shaved into the shape of a little Christmas tree. Nice touch, Aardman. Could this have been done in traditional stop motion? Absolutely. But I’ve got to admit, it may not have worked as well.

This movie was pretty well received, but I feel like it’s been largely forgotten since it came out in 2011. If you haven’t seen it before, seek it out with your kids. Except for the original Miracle on 34th Street, I honestly think it’s the best Santa movie we’ve covered here this week.