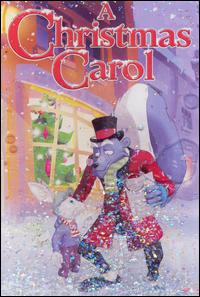 Notes: I’m trying to figure out where, exactly, I got this version of A Christmas Carol. I’m pretty sure it was on sale at Half-Price Books for a few dollars, and I got it because I’ve got a weird obsession with such things. Also, the DVD case has a liquid pouch with glittery “snow” in it, and I’m a sucker for such things. Anyway, this animated version of the story recasts the Dickens characters: the Scrooge family are skunks, the Cratchits are rabbits, and Marley is a Cricket. Past, Present and Future are a stork, a kangaroo, and a walrus, respectively. There are no voice actors credited for this movie either on IMDB or Wikipedia, which I’ve never seen before, and makes me wonder how exactly this short (48 minute) adaptation happened other than spontaneous combustion.  There are credits at the end (which is where the above cast list came from), but the film doesn’t bother to tell you who provided each voice, so I can’t even help you there. One of the above people played Scrooge. I’m betting on Theresa Gallagher.

Thoughts: Another animated version of Dickens, this one with weak computer animation rather than weak traditional animation, it’s hard to qualify the film. This is a post-Pixar world, friends. This came out the same year as Cars and Monster House, but the quality of the animation isn’t even as sharp as that of Pixar’s earliest efforts. The animation is in computerized 3d, but the coloring is flat, like it’s trying to mimic a hand-drawn effect.  I almost want to believe this was somebody’s student animation class project (made because you don’t have to pay for the rights to Dickens) that somehow got a DVD release.

We have a narrator and the characters are familiar, but the Dickens dialogue is thrown out the window immediately. Instead we’ve got super-greedy Scrooge berating Bob Cratchit over a missing farthing he’s too blind to realize is sitting on his own forehead until Fred arrives and points it out to him. The plot – for now at least – follows Dickens fairly closely. Scrooge is grouchy to Cratchit and grouchy to Fred and even blames his food for upsetting his stomach when Marley shows up. Speaking of Marley, the flaming cricket that plays the part shows even less animation than the rest of the cast. When he flails about on his chain, it looks like a toy on the end of a stick being waved around both willy and nilly.

When Christmas Past shows up, it appears first as Scrooge’s pillow, which scares the crap out of him. Cute enough. When she turns into a stork, though, she drops a joke about “pillow talk” that almost made me choke to death on the gingerbread M&M I was eating – not because it was funny, but because the filmmakers included such a (relatively) adult joke in the middle of a cartoon that, until now, seemed to be crafted to cater specifically to the 3-to-3 ½ year old demographic. Christmas Past whisks Scrooge to the past, where he sees himself and Sister Fan making the world’s ugliest snowman.

This time, for the first time in any version of the film, we see baby Fred. He’s not the cause of Fan’s death, but he is the cause of Scrooge’s isolation. Fan had promised Scrooge he could leave school and live with her, but with the baby there’s just no room for him. Young Scrooge storms out, not hearing Fan tell her baby how much she loves and misses her brother. Old Scrooge hears it, of course, but the whole thing rings pretty hollow, seeing as how these computer animated figures move at about the speed of a radio controlled car with a missing wheel. She could have caught up with him pretty easily.

Christmas Present hops onto the scene, a kangaroo, with an Australian accent because duh. At the Cratchit house we meet Tiny Tim, who isn’t even sick in this version. He still makes Scrooge feel like kind of a jerk, though, as he expresses a child’s love for the old miser.

Christmas Future, the walrus, is surprisingly funny. He sparks with red lightning and he has a broken tusk that looks like it’s been lashed together with a leather strap. And as he talks (yep, this one talks), his big jowls flap around over the tusks. His is actually the best animation in the entire film.

This is when the film goes off the Dickensian rails. Instead of dying, we see that Tiny Tim has grown up into an old, bitter codger just like Scrooge. This doesn’t seem to make any sense at all; there’s no motivation that seems in place to push Tim down that particular path. Then the movie actually makes a funny point when it gets to Scrooge’s death. In this version, Scrooge learns that he’s been crushed to death under the weight of his own gold. It’s goofy and ridiculous, and it actually entertains me for about five seconds before the character pushes it too far and changes the subtext into text by announcing Scrooge was killed by his own greed. You know. In case anybody didn’t get that.

So at the end, the Walrus of Christmas Future tells Scrooge to open his heart and he wakes up back in his own bed, and I realize with utter shock that there are still 15 minutes left in this movie. Considering how quickly everything has been rushed through, what could they possibly have to fill up that gargantuan amount of time?

Scrooge starts to dance and sing about dancing and singing, informing everybody he meets that he won’t need another chance, which is swell, but the movie seems to have forgotten one of the primary rules of musicals. Namely, you need to have a musical number before the final reel of the film, or else it feels like it comes out of nowhere. Because it does.

Then there’s the last scene, which again departs from Dickens in a big way, as Marley reappears and tells Scrooge that he’s been set free from his eternal torment. Somehow, his concern for Scrooge has redeemed Marley as well. I have to admit, as deviancies from the classic go, I’m… I’m kind of okay with this one. I mean, it does somewhat undercut the notion that Scrooge had to change before it was too late, because evidently it’s never too late in this universe, but that’s not necessarily the worst message to take away from a story like this.

This isn’t a good version of A Christmas Carol, don’t get me wrong. The animation is terrible, the dialogue is weak and the song at the end is guaranteed to make you want to plunge a stake of holly through each eardrum. That said, it’s not the worst version I’ve watched either.