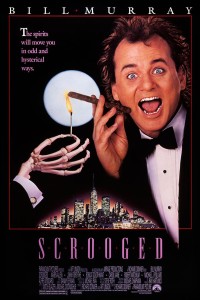 Notes: This is one of the biggest departures from Dickens we’ve seen yet (and the biggest, I suspect, that we will see in this project, although other movies stray even further from the formula). Bill Murray plays Frank Cross, a disgruntled television network president who is planning a live production of Scrooge on Christmas Eve, loaded with stars like Buddy Hackett as Ebenezer Scrooge and Mary Lou Retton as Tiny Tim. But Frank has lived a rather Scrooge-like life himself, and the Ghosts of Past (Carol Kane), present (David Johansen) and Future are at work once more. We also get Bobcat Goldthwait splitting the Bob Cratchit role with Alfre Woodard (whose young son Calvin, unable to speak for some reason, is our Tiny Tim stand-in), Murray’s younger brother John playing a Fred-like part in the story, and Karen Allen filling in for Scrooge’s lost love Belle in a greatly expanded part than the character has had in any other version of the tale. John Forsythe plays Frank’s late boss, taking the Jacob Marley part.

Thoughts: This weird version of Dickens kicks off with Lee Majors leading an expedition into the North Pole to save Santa from a bunch of terrorists, which he accomplishes by arming the crap out of Santa, Mrs. Claus and all the Elves, all cast against a setting that could have fallen from Tim Burton’s brain. (It doesn’t hurt that we get a Danny Elfman score). It turns out to be one of several horrendous specials planned for the IBC network this year, all being shown to Frank Cross (Bill Murray). As we get to know Frank, we see quickly he’s not exactly Scrooge. Sure, he’s self-centered and greedy and completely lost touch with everything that matters in life – he’s so callous that when a woman has a heart attack and dies after seeing his Scrooge promo he considers it nothing but world-class publicity — but he’s still played by Bill Murray. Such a character cannot be without a sense of humor, and after yesterday’s bitingly joyless performance by George C. Scott, this is already a drastic improvement.

Forsythe’s Lew Hayward is the most gruesome apparition I’ve seen all month. Although he’s talkative and chipper, he looks like a zombie – and not a fresh one either. He’s dried up, desiccated, with rats crawling from a hole in his skull caused by the still-embedded golf ball that killed him. He fills his role neatly, but the sarcastic way Bill Murray deals with him deflates the character right up until Lew gets pissed and dangles him out the window to prove his point. It’s a shame that Murray didn’t have time to call his friends – he knows some people with ghost experience, after all.

Yet another thing that sets Frank Cross’s story apart from Ebenezer Scrooge is that he’s given a chance to return to his life after each ghostly encounter. His meeting with Lew Hayward puts him in touch with Claire Phillips – played to charming perfection by Karen Allen. Claire, it seems, is the one that got away, the love of Frank’s life, the girl who he left behind when he got big. Unlike Scrooge, Frank has a second chance – Claire is still single and she’s clearly happy to see him again. Of course, it wouldn’t be much of a movie if he didn’t come close to screwing it up all over again.

David Johansen is our Ghost of Christmas Past – here depicted as a rough New York cab driver whose taxi takes Frank back in time to relive childhood Christmases where his father (Brian Doyle-Murray) gave him meat and less distant years when things with Claire were pretty good… until they went bad. Johansen is a nice character – funny and sarcastic at the same time, even with his harsh edge. Despite that, though, despite heaping verbal (and even a little physical) abuse on Frank, you never lose your faith that his ultimate goal is for Frank’s ultimate good.

In Carol Kane, we get a Christmas Present that looks like a tooth fairy and has the clear-headedness of a toddler. She also has no problem with smacking Frank around when he needs it, which he frequently does. Her visits with Frank’s brother and Alfre Woodard’s family do more than the traditional Christmas Present visits, where Scrooge usually sees what he’s missing out on and begins to feel empathy for Tiny Tim. Here we also see how good everyone else is in comparison to him—Woodard goes behind Frank’s back and sends his brother a VCR for Christmas rather than the proscribed towel he’s handing out to everyone else. This is also where the movie takes a sharp turn into melancholy when we encounter a homeless man (Michael J. Pollard) Frank had earlier met at Claire’s soup kitchen, now frozen to death. It’s a perhaps the saddest moment in the film, and it gives Frank just the right blow to turn the chink forming in his armor into a full-on crack. It’s just such a sad, hopeless, pathetic sight you can’t help but be affected, and Murray’s enraged screaming at Pollard’s frozen corpse is the clearest indication yet he has a conscience in there somewhere. He may be yelling at Herman for being stupid, but he really hates himself for not doing anything to save the man when he had the chance.

The puppet they use for Christmas Future here is the scariest damn version of the character yet, making his first appearance on a wall of television monitors and reaching out of it for Murray just before Bobcat Goldthwait bursts in with his shotgun. (More on that shortly.) The future he shows Frank is even bleaker than Scrooge’s usual future. Claire isn’t just alone, she’s embraced Frank’s gospel of greed. The non-talking Calvin (Nicholas Phillips) isn’t dead, but he’s been committed to a sanitarium. Brother James comes off the best in the future – he and his wife (Wendie Malick) are the only two people who show up to watch Frank’s cremation, except for Frank himself… and he, naturally, winds up in the coffin.

Although Bobcat Goldthwait’s Eliot Loudermilk is filling the Bob Cratchit archetype, a Cratchit he’s not. He has good intentions, but after Frank fires him in the opening scenes of the movie, he goes nuts. He shows up later toting a shotgun, planning to get his revenge. Fortunately for him, Frank has been redeemed by that point and not only gives him his job back, but recruits him as his sidekick in the glorious finale, in which he takes over the studio at gunpoint and shows off his newly-discovered Christmas spirit to the world.

The finale, in fact, is why I love this movie so much. Not to say the rest of it isn’t entertaining, but if it weren’t for the ending, when Bill Murray stands in front of the cameras and expresses his joyful spirit to the whole world, even winning back Claire. The happiness and sincerity in that final sequence is maybe the most believable such redemption I’ve ever seen a Scrooge undergo. He shouts at the camera, he pleads with the audience for everybody to embrace the feeling that’s overtaking him, and Bill Murray sells every inch of it. And if you don’t laugh when he starts talking to the audience in the movie theater, compelling them to sing along, I don’t know if I want to know you. Scrooged may be the least Dickensian of the films we’ve watched, but it’s easily one of my favorites.