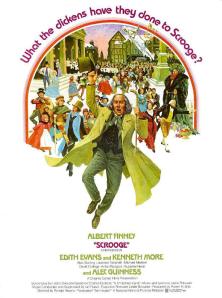 Writer: Leslie Bricusse, based on A Christmas Carol by Charles Dickens

Notes: This version of Scrooge is a musical extravaganza that got four Academy Award nominations, including best original song and best score. Albert Finney’s Ebenezer Scrooge scored the Golden Globe award for best actor in a motion picture, musical or comedy. For the most part, this version of the story is quite faithful to Dickens, with a few small additions at the end that really make its mark.

Thoughts: To many people, the battle for the ultimate version of A Christmas Carol comes down to the Alastair Sim version we discussed a few days ago and this musical version. It’s hard to argue. There have been dozens, maybe hundreds of different incarnations of the story since then, but these two seem to be the purest and most entertaining renditions of the story ever put to film.

Credit for the longevity of this version, I think, is to be shared between Albert Finney – for a phenomenal performance as Scrooge – and Leslie Bricusse, who wrote both the screenplay and the music for this film. Scrooge’s intonation of “I Hate People” is as perfect a summation of the miserable wretch he is that I’ve ever seen. He’s cold, he’s bitter, and he’s angry at the world. Such a person is, of course, both miserable and terribly comfortable in his misery. Going back to the Sim version, the Scrooge who was afraid of change, Finney’s Scrooge comes off as a man who is also very set in his ways, and doesn’t care if that comfortable place is one of loneliness and pain.

Sir Alec Guinness steps in as Marley’s ghost this time around, and his interpretation is… unique. Guinness has this slow, deliberate walk, almost like he’s moving through water. If you really want to try to analyze it, I suppose you could intuit that ghosts have less substance than matter in the world of the living, and therefore ordinary matter has a degree of resistance that has an unexpected impact on their ability to move. Of course, anyone who would go to such lengths to rationalize such a relatively short scene in the movie would be kind of crazy, so I’m not going to try to do such a thing. Regardless, Guinness’s odd motion is creepy, even more so when he begins floating, bellowing his warning to Scrooge and bound to the Earth only by one of this oh-so-heavy chains.

Like Marley, Edith Evans as Christmas Past is unique. The filmmakers take advantage of Dickens’s non-description to whip up a character that looks, talks and dresses like the sort of uptight grandmother you see in movies where kids have to teach the grown-ups to lighten up, okay? There’s a bit of irony there – her task, after all, is to teach that same lesson to Scrooge. And what’s more, he starts learning that lesson right away. As soon as he sees himself sitting alone in his schoolhouse while his classmates rush about and celebrate Christmas, he expresses regret that he didn’t join them. This version, too, implies that Scrooge’s sister (“Fran” instead of the traditional “Fan”) died giving birth to young Fred, and as I’ve already discussed why I think that works for the character in a previous article, I won’t belabor the point.

This section also includes one of the peppiest musical numbers in the film – Laurence Naismith and Suzanne Neve as Mr. and Mrs. Fezziwig, cheerfully extolling the virtues of “December the 25th” as a rhythmless Scrooge looks on, unable to dance. It’s a rather old-fashioned tune, one that feels like it could have spilled right out of the golden age of the Broadway musical, and I actually think it’s quite a shame it doesn’t get more play when people are lining up their traditional Christmas song lists.

Kenneth More’s Christmas Present is much more traditional – green robe, holly wreath around his head, sitting atop a mountain of food and riches, as he always makes his appearance. His powerful anthem, “I Like Life,” is a perfect counterpoint for Scrooge’s earlier “I Hate People.” At first, it feels like he’s berating Scrooge, calling the miser’s philosophy “self-pitying drivel.” As the song progresses, though, we get to the root of it – he’s putting the skinflint through a sort of spiritual boot camp, shaking down all his pretenses so that he can be rebuilt into a man who truly does enjoy the pleasures of life he’s denied himself for such a long time. Many versions of this story make the moment when Christmas Present whisks Scrooge out the window into the air into a scene of terror, but not here. By this point, Scrooge is on-board, singing along and joyously joining in on their flight above London… right until they crash into the snow outside Bob Cratchit’s house.

Christmas Future is where this version of the film really begins taking liberties, and in fact, I like the ones that they take. Rather than starting out with people talking about the death of a lonely man and Scrooge not realizing they’re talking about him, this version starts with people outside of Scrooge’s counting house, cheering for him, joyfully talking about the “wonderful thing” Scrooge has done for them. Scrooge is moved and swept away with emotion, believing himself already redeemed, and doesn’t even notice when his own casket is carried out of the counting house. The irony of the scene is made even worse as the people start singing the gleeful tune “Thank You Very Much” (the song nominated for an Oscar). He marches along, dancing with people, completely oblivious to the fact that they’re celebrating his corpse. It’s happy and chilling all at the same time.

Once we make it to the cemetery, though, things get really freaky, with Christmas Yet To Come (here a sort of fossilized corpse) shoving Scrooge into his own grave and allowing him to plunge all the way to Hell! Scrooge’s final destination if he doesn’t change is always clear in this story, but this is the first one I know of that goes far enough to actually drop him into the pit, where he wakes up in a coffin-shaped hole and is told by Marley he’s been bound to be Lucifer’s bookkeeper. Director Ronald Neame didn’t bother with subtlety here.

“I’ll Begin Again,” Scrooge’s song when he wakes up and realizes he’s not dead after all, is a fantastic number. There’s a hope, a glee, and a sincerity inherent in his words that sells every moment. When we watch this old man dancing through a drafty old mansion covered in cobwebs, you feel every bit of the change he’s experienced. Once he sends the urchin off to buy the turkey and he chirps, “I think I’m going to like children,” even the stoniest heart will have come on-board with Scrooge’s reformation.

This is one of the truly classic renditions of A Christmas Carol, one of the best ever put to film, and I think I’d have that opinion even without the powerful teaks we’re given in the Christmas Yet to Come segment. Beautiful music and a magnificent Scrooge combine to give us a film one really should watch every year. And let’s not forget the most important lesson of all: Alec Guinness really knows how to play a ghost, doesn’t he?