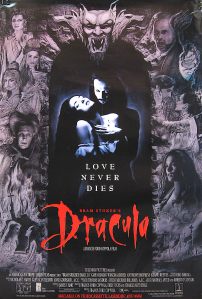 Writer: James V. Hart, based on the novel by Bram Stoker

Plot: In 1492, the warrior Vlad Dracula (Gary Oldman) returns from battle to find his wife Elisabeta (Winona Ryder) has killed herself after hearing a false report of his death. Enraged, Dracula renounces God and stabs a cross, which begins flowing with blood. He drinks the blood and screams.

Over four hundred years later, solicitor Jonathan Harker (Keanu Reeves) is given an account from his colleague Renfield (Tom Waits), who has gone mad. Harker says goodbye to his fiancé, Mina (Winona Ryder again) and travels to meet his new client, Count Dracula of Transylvania – now a frail-looking old man, but with horrible power. When Dracula sees Harker’s photograph of Mina, he is stricken, believing her to be the reincarnation of his long-dead wife. Harker explores the castle, only to be found and fed upon by Dracula’s three “brides” (Monica Bellucci, Michela Bercu and Florina Kendrick).

Mina’s friend Lucy Westenra (Sadie Frost) is romanced by three separate men: a visiting American, Quincy Morris (Billy Campbell); Dr. Jack Seward (Richard E. Grant); and Lord Arthur Holmwood (Cary Elwes). She ultimately accepts Arthur’s proposal of marriage. Dracula, meanwhile, has boxed up himself and the most important parts of his household and is sailing to England and his new property in Carfax Abby. As they arrive in England, Dracula transforms into a wolf-like monster and seeks out the home of Harker’s fiancé. Mina awakens to see Lucy, mesmerized, leaving her home in the midst of a storm, and finds her being ravaged by the wolf-man. When he sees Mina watching, he flees. In the morning he appears as a young man, and introduces himself to her as “Prince Vlad of Sangre.”

Concerned for Lucy’s ailing health, Seward calls for Dr. Abraham Van Helsing (Anthony Hopkins). He arrives to see Lucy again being drained of blood, this time by Dracula in shadow-form. He gives her a transfusion from Arthur. Elsewhere, Dracula plies Mina with absinthe, wooing her slowly. Harker manages to escape from Dracula’s brides and sends for Mina to join him so they can finally be married. When she bids farewell to her “prince,” he goes into a mad fit and kills Lucy. After her funeral, Van Helsing convinces her three suitors to join him in opening her crypt, only to find it empty. Lucy, now a vampire, enters the tomb with a small child intent on feeding, and the men slay her. Harker joins them and tells them Dracula resides at Carfax Abby, and they plan to destroy him.

Van Helsing and the others go to the Abby and begin destroying the boxes of Transylvanian soil Dracula must sleep in. He, meanwhile, visits Mina, who begs him to grant her his gift of eternal life. As she drinks his blood, Van Helsing and the others burst in and force him back. He transforms into a horde of rats and escapes. He takes a ship to return home, but the others take Mina by train, a much faster voyage. Van Helsing and Mina travel to the castle, while the others try to head off the gypsies transporting Dracula’s casket. The Brides attack Van Helsing, but he manages to track them to their crypt and slay them by the light of day. The hunters catch up to Dracula at the castle. Morris dies in the battle, but not before stabbing Dracula in the heart. The wounded vampire crawls into the chapel where his curse began and dies, Mina by his side. She professes her love to him before cutting off his head, releasing him from his curse. A fresco appears, picturing the human Vlad and Elisabeta rising, at long last, into Heaven.

Thoughts: You’ve got to give Francis Ford Coppola credit – the man doesn’t do half-measures. From the first moments of the film, when we see Gary Oldman marching around in blood-red armor sculpted to suggest bare muscle tissue, we know we’re in for a wild sort of ride. That’s only where it begins, though – Coppola took great pains to give this film a unique look, eschewing camera tricks, even the sort of green screen that was common when the film was made in 1992. Every effect is practical, including the projection of words on the faces of actors, the reflection of enormous eyes onto glass windows, and some frankly humorous model train work. Lightning strikes don’t look remotely realistic, instead giving the impression of someone shining a flashlight through a cut-out flat behind the actors. It’s as if Coppola decided that he was by god going to make sure everything he captured on film was no more complicated than he could have gotten out of a community theater production of the story. And boy, did he succeed.

Despite the inherent goofiness of doing something this way, though, I find that the look of the film is one of the first things I loved about it. This doesn’t look like any of the other Dracula movies I’ve seen… hell, it doesn’t look like any other movie I’ve seen. It has a unique sort of style, not just in the design but in the way all the elements come together, that appeals to me in ways I can’t fully articulate. Let’s just say there’s something really cool about all of it, the same way you realize your dad was kind of cool when you get older and catch yourself making the same kind of jokes that embarrassed the hell out of you when he told them to your friends.

On the plus side, some of the monster effects are really cool. While certain other films downplayed the notion that vampires could change their shape or were limited by the effects of the time, Coppola pulls off a pretty convincing monstrous transformation on the screen, with Oldman metamorphosing from a pale creature to a hairy, wolflike beast. (Yeah, folks, in classic lore vampires could turn into bats or wolves. Also mist. It’s cool.) The design of the human-sized bat is really creepy and worthy of the nastiest supernatural horror flick. The set design is impressive, and the costumes are top-notch.

Gary Oldman… if ever there was an actor who gave himself entirely to the movie, it’s Gary Oldman. He’s given us the finest interpretation of Commissioner James Gordon ever to fit a Batman movie, and he’s also given us the insane, over-the-top lunacy of The Fifth Element. One thing you can count on is that he never phones in his performance. In this film, he revels in the cheesy dialogue and ridiculous character work he’s asked to do. Every chunk of scenery to be chewed, every wild arm flailing or preposterous accent… when Gary Oldman presents it to you, you know he believes it.

Winona Ryder is pretty effective as Mina, pulling off a passable British accent and a convincing amount of young naiveté, as befits the character. Anthony Hopkins brings his usual air of class to Van Helsing, and Cary Elwes continues to prove, as I asserted back during Robin Hood week, that he should have been born in an earlier era, because he has the presence of a grand star of cinema’s Golden Age. Keanu Reeves plays Keanu Reeves.

I’m a little weirded out by the ending, to be perfectly honest. Coppola appears to be trying for some sort of fable about the healing power of love, showing some sort of redemption for Dracula after Mina’s love “sets him free” (by means of brutal decapitation). That’s all well and good, lord knows there aren’t many people that believe in true love as much as I do, but is Dracula really the best place to insert that particular moral? The man is, by every definition of the term, a terrible monster. He chose to turn against God, he brutally murdered countless people over 400 years, but at the end he seems to get a pass just because he got a woman (that he gave the vmpire equivalent of a roofie) to say she loves him. That’s the ending of Beauty and the Beast, except that the Beast was only guilty of kidnapping and a little mild verbal abuse. How does Dracula deserve redemption?

That aside, I enjoy this movie quite a bit. It’s a well-made production with its own look and feel that sets it apart from any other version of the character, and for me, that’s one of the most important things you can look for in a movie.