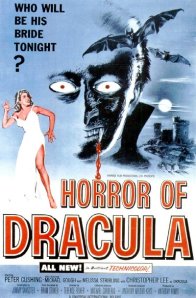 Writer: Jimmy Sangster, based on the novel by Bram Stoker

Plot: Librarian Jonathan Harker (John Van Eyssen) is called to Castle Dracula by its mysterious count (Christopher Lee). He encounters a strange woman (Valerie Gaunt) who begs him to help her escape, but she flees as Dracula makes his appearance. Dracula has summoned Harker to index his enormous collection of books, and encourages him to make the castle his home as he works. As Dracula leaves him, Harker pens a journal entry that reveals his true intention – to end the Count’s reign of terror forever. That night, he again encounters the strange woman from before, and she again begs his help, only to bite him on the neck. As she does so Dracula appears, blood on his mouth, and he attacks the woman. Harker grapples with the Count, but is defeated, and Dracula takes the woman away. Harker wakes up in his bedroom the next morning, a pair of fang-marks on his neck, and decides he must exterminate Dracula before sundown. He finds the crypt and drives a stake through the vampire woman’s heart, awakening Dracula just as the sun goes down. Dracula seals Harker in the tomb.

Some time later Dr. Van Helsing (Peter Cushing) stops at a tavern, seeking word of the missing Harker. A tavern girl gives the Doctor a book she found – Harker’s journal. He finds Castle Dracula and the bodies of both the vampire woman and Harker. Van Helsing returns to Harker’s bedridden fiancé, Lucy (Carol Marsh) to tell her of Harker’s death, but her brother Arthur (Michael Gough) and his wife Mina (Melissa Stribling) hide the truth from Lucy, unaware that she is already being visited by Dracula in the night. He is biting her, draining her slowly, preparing her to become his new thrall.

As Lucy is treated for what her doctors believe to be anemia, Van Helsing recognizes the symptoms of a vampire attack. He orders the windows in her room shut at night and the room filled with garlic cloves. At Lucy’s behest, though, her housekeeper (Olga Dickie) opens the windows and removes the garlic. In the morning, Lucy is found dead. Later, the housekeeper’s daughter Tania (Janina Faye) claims to have encountered her dead “Aunt Lucy.” Arthur goes to her tomb that night and finds it empty. Lucy, now a vampire, summons the child to her and they encounter Arthur. Van Helsing saves him and stakes Lucy, sending her to a true rest. Arthur gives Mina a cross to wear, but upon touching it she shouts and collapses, the cross burned into her flesh. She, too, has been touched by the vampire.

That night, Dracula comes for Mina again, draining her so completely Van Helsing has to give her a transfusion of blood from Arthur. Van Helsing finds Dracula’s coffin in the cellar, but the Count takes the moment of distraction to take Mina and flee. They chase him back to Castle Dracula, where Van Helsing exposes him to the light of the sun. Dracula shrivels and turns to dust, his reign of terror ending… until the sequel.

Thoughts: It is utterly unforgivable that I’ve been conducting these movie studies for three consecutive Octobers now, and this is the first time I’ve touched upon the storied Hammer Films catalogue of horror. While Hammer may not have the immediately recognizable icons of Universal (although they in no small way owe their fame to remaking the characters Universal made famous), it’s no less an important chapter in the universe of terror, and I should have delved into it a long time ago.

That said, I picked a great film to begin my Hammer Horror education. Horror of Dracula was Christopher Lee’s first time portraying Count Dracula, and he did a fantastic job in the role. Although largely absent from the middle section of the movie, his presence is compelling and powerful, a real menacing figure worthy of the Dracula name. In the final confrontation with Van Helsing, he momentarily devolves into a mad, snarling beast, and it’s a great moment. You’re terrified of him, you think he’ll rip Peter Cushing’s throat right out. He’s a monster in the best sense of the word.

He’s also the subject of some pretty impressive special effects. When the sunlight kills him at the end, the way he wilts away into nothing is really remarkable for a 1958 film. Hammer truly was on the top of its game.

As Van Helsing, Peter Cushing makes for a great hero. There’s an authoritative sense to him – he’s a man you want to trust in the middle of a terrible ordeal. He carries a gravity and a power that makes the situation seem just as serious as a horror film should seem. Even now, over 50 years later, this really works as a horror classic.

The structure of this film is odd. It’s based on the original Dracula novel, at least in part, but both the plot and the characters presume a great deal of familiarity with the Dracula concept even before the film begins. Harker knows who and what Dracula is and has a plan to destroy him from the very outset, although Dracula seems at least initially fooled by his façade of being a simple librarian. It’s almost as if the film’s heroes had read the novel and decided they wanted to cut off the monster at the pass. Of course, that sort of genre awareness seems to evaporate when Harker reaches Dracula’s crypt and stakes the woman first. Seriously, man? You always kill the boss first, if you’ve got the chance. It’s like this 19th century character from a 1950s movie had never played a video game or something.

Although clearly inspired by Bram Stoker, screenwriter Jimmy Sangster took some unusual and rather inexplicable liberties – changing Harker’s love interest from Mina to Lucy, making the two sisters-in-law, making Arthur Mina’s husband and so on. All in all, the film succeeds in telling a perfectly coherent story, but it’s not exactly the same story as the book. That’s not necessarily a bad thing, mind you, but it is a… thing. That happened. And I find it curious enough to point it out. The film also attempts to distance itself from the novel, accepting the by-then common conceit that the vampire cannot venture out in the daylight (absent from the novel) and dismissing the idea of the vampire changing its shape as “pure fallacy” (this idea was present in the Stoker original). I’m truly not sure what to make of it. The writer really seems to be struggling to buy in to the existing Dracula mythology, while picking and choosing the parts he likes and bringing in other elements pretty much at will. I don’t know how a storyteller reconciles those two impulses, but Sangster at least manages to turn out an entertaining story in the mix.

If nothing else, the movie is plenty of fun and a great film to throw on during your Halloween party… or any other time you’re looking to have a creepy good time.