Sherlock Holmes Week Day 4: Matt Frewer in The Case of the Whitechapel Vampire (2002) 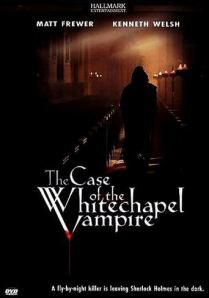 Plot: The week after a strange murder in an abbey, Sherlock Holmes (Matt Frewer) and Dr. Watson (Kenneth Welsh) are engaged in a debate on the existence of an afterlife. Holmes is sent a message from the Whitechapel Abbey informing him that there are fears that the murder was the work of a vampire, something Holmes dismisses as unscientific nonsense. At the Abbey, Brother Marstoke (Shawn Lawrence) gives them a tour, telling them of a legend of a demon that manifests itself as a vampire bat. Following a failed attempt to exterminate a colony of bats, a series of murders have brothers of the abbey. There have even been mild tremors from time to time, something Holmes experiences himself. The first murder came with a message written in blood that convinces the Brother that a vampire is responsible, but Holmes recognizes a different modus operandi – that of the still-at-large serial killer Jack the Ripper.

Although Holmes continues to play the skeptic, Watson is at least open to the possibility of a supernatural explanation behind their latest case. Holmes questions Dr. Chagas (Neville Edwards), a scientist who was studying the bats before Marstoke had many of them killed, and who has a bitter anger against the monk. While Holmes returns from his visit with Chagas, the killer strikes again, murdering a monk and attacking a nun, but he seems to be frightened off by the light glinting from her crucifix.

Holmes speaks to Inspector Attley Jones (Michel Perron), who has arrested Chagas, but as Holmes was with him only minutes before the last murder happened, he is no longer convinced of Chagas’s guilt, even though his gloves are covered with blood. As Holmes and Jones argue, Chagas escapes. Holmes finds that others in the Abbey have a grudge against Marstoke, including Brother Abel (Tom Rack), who sees Marstoke’s fascination with vampires and demonology to be sacrilegious. Holmes is attacked by a robed figure who tries to shove him in front of a speeding horse. Holmes escapes, but so does his attacker.

Watson calls the people of the Abbey together with a message from Holmes: he has been arrested, and he now believes that there is a demonic influence upon the Abbey. Brother Marstoke, blaming himself for bringing evil to the church, swears to leave in the morning. As he goes, alone, to pray that evening, he is approached by the robed killer. The killer is surprised to find Holmes instead, and the two grapple for Holmes’s gun. Although the killer gets the upper hand, the police arrive just as another tremor hits. A statue topples over and crushes the killer. Holmes unmasks the body to reveal Brother Abel.

Watson later explains that the tremors were actually because the Abbey’s foundation has been weakened by nearby expansion of the London underground to Whitechapel. Holmes explains that when Jones found the blood on Chagas’s gloves was actually bat blood and not human, he realized he was innocent and the three men set the trap for Abel. Holmes then reveals the several small clues from throughout the film that pointed to Abel, and Chagas provides the motivation – Abel had been stricken by a disease he blamed Marstoke for bringing to the chapel. The case closed, Watson asks his friend if Holmes has reconsidered his stance on the supernatural, considering the tremor’s remarkably timely rescue. Holmes, of course, will have none of that.

Thoughts: You know you’re in for a treat when the very beginning of a movie is a title card proclaiming “The film is based on the stories of Sir Arthur Conan Doyle, which is in the public domain, but it has not been authorized by any owner of any rights in the works of the author.” Even though it should say “which are in the public domain,” it still gives you this warm, fuzzy feeling of confidence, which is matched only a second later when the next card reminds you that you’re watching a Hallmark Presentation. Ah, Sherlock, what are you in for this time?

Let’s be clear here – we are past the time when “made for TV” or “direct to DVD” was automatic code for “cheap and poorly-made”. Some television networks have made excellent motion pictures, some really good films are made specifically for retail-only release, and the evolution of digital media will probably lead to even more quality entertainment produced in such a fashion. This film, however, was made in 2002, when “made for TV” still had a cheap feeling to it. The sets and costuming are all perfectly good, but there’s a weak musical score that sounds like it was whipped up on a synthesizer bought from Best Buy and the cinematography has that sort of… well, for lack of a better term, “TV” feel to it. You probably know what I mean – it’s an undefinable quality that allows you, at a glance, to tell if the film you’re watching was shot on a budget or not. None of that is what really makes this film weak, though. The biggest problem is the pace. The story feels like it wants to be a TV show rather than a movie… it’s slow, it unreels at a tempo that’s a bit frustrating. The writer seems to be under the impression that it’s okay to leave things dangling because he can always pick them up next week, then has to rush in the last five minutes when he realizes that isn’t possible. Even though this was the fourth (and final) Hallmark Holmes movie starring Frewer, you’d want a film of this nature to feel like it can stand on its own, which it never really does. The movie is only 88 minutes long, but may be the longest 88-minute movie I’ve ever seen.

Generally speaking, I like Matt Frewer as an actor. He may be best known as a Max Headroom (if you’re a child of the 80s – if you were born later you likely don’t know him at all), but he’s done good turns in things like The Stand and, more recently, a moving performance as a cancer patient in 50/50. However, he’s really ill-suited to Holmes. Frewer is surrounded by a cast of British actors, or at least actors who can do a passable British accent, which makes his overdone, over-enunciated and over-wrought dialect stand out almost painfully. It’s like when Madonna tried to pretend she was British for a while – she thought it made her sound sophisticated, while instead we looked at her with a mixture of bemusement and pity. Frewer does a lot of things well – he’s strange, quirky, and slightly pompous in a way that fits the character of Holmes. But it’s really, really hard to get over the goofy attempt at an accent.

Kenneth Walsh does a better job as Watson. Although significantly older than Holmes, with that he has an air of competence and dignity that befits the character. What he lacks, however, is a sense of fun. Nigel Bruce may have been a little goofy, but he at least seemed to enjoy the role. Colin Blakely was excellent. Walsh is merely competent, and that’s pretty much the closest thing to an insult you can say without actually saying something negative about an actor.

I actually like the attempt to do something new with Holmes here. Although Doyle wrote some 56 short stories and four novels starring Holmes, it seems there are just a few in usual rotation for adaptations (The Hound of the Baskervilles, The Sign of Four, and a sort of an amalgamation of the relatively few Moriarity stories). In truth, not all of them would work that well in film, and considering how many other writers have played with Holmes since Doyle’s passing, telling an all-new tale with the detective doesn’t bother me in the slightest. I even like the idea of having him try to investigate a supernatural mystery. The movie doesn’t go so far as to confirm the existence of vampires in this universe, and there is nothing out-of-context or anachronistic about having people afraid of such a creature. It’s a way to have a little fun with a familiar character, placing him in a different arena than he’s used to.

The end of the movie goes for the classic “parlor room scene,” where Holmes explains just how he deduced the killer’s identity. It feels a bit clunky, though, a bit perfunctory. What’s more, it’s sort of irrelevant at that point. Even though Holmes knew it was Abel behind the mask of the killer at that point, it doesn’t really matter. It could have literally been anybody in the chapel that took the bait and then got caught when the tremor knocked over the statue… it’s a “whodunit” where the “who” is largely an afterthought, and that’s a weak story in any case.

The other three Hallmark Holmes movies were all actually based on Doyle’s stories, including adaptations of Baskervilles and The Sign of Four, and it’s possible that those are structured better than this stab at doing something different. And since the DVD set I’ve got has all but one of those films on it, maybe I’ll even give the others a go some time. But not now, not until the memory of better Holmes fades and the urge to give Matt Frewer another chance rises again. As for now, I think I need to turn to a Holmes that does the story different, but does it better nevertheless.