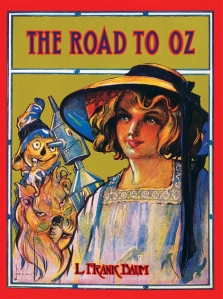 So what have we learned this week?

We’ve learned that Dorothy Gale from Kansas is a character who can survive almost anything. She’s a child with a wise, kind heart, and one who can stand up to all manner of wicked witches, evil dictators, nomes, monochromatic elephants, monsters, wheelers, androids, and Richard Pryor. But I think we’ve also learned that, unlike many of the other characters the Icons project focuses on, she’s not necessarily the most important part of the story. Dorothy, even in those early days of L. Frank Baum, was most effective when used as the audience’s viewpoint character, the little girl from the real world who allows us to see Oz through fresh eyes. Giving her a ton of Oz-rich backstory can work well (like in Tin Man) or be a disaster (such as in the 1925 Wizard of Oz), but either way, it’s not strictly necessary to tell an Oz story. There are plenty of other ways to do it. And if you don’t believe that, start hunting down the public domain Oz books available freely online, or even visit your local library.

Because reading is good.

Anyway, since (as we’ve said) Dorothy isn’t strictly the most important character in Oz, let’s move on to another story told through the eyes of someone who’s not, technically, the hero. Arthur Conan Doyle knew, when he was creating the smartest man in the world, that the audience would only understand the stories if there was more of an everyman to relate to, and thus he created Dr. John Watson. But Watson isn’t the star, is he friends? Come back in late May for the third Icons week, when we turn our eye to the world’s greatest detective, Sherlock Holmes.

Posted on April 28, 2013, in 4-Icons and tagged L. Frank Baum, Wizard of Oz. Bookmark the permalink. Leave a comment.