Next week is BATMAN WEEK! 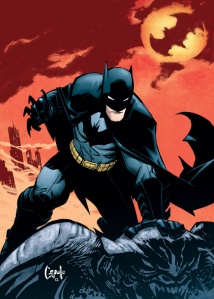 To launch the new Icons series, next Monday, March 25, will be the beginning Batman Week here at ReeltoReelMovies.com. About once a month, the Icons series will spotlight a different character who has been portrayed in film by at least five different actors, and examine how depictions of that character have changed over time. For Batman week, here are the films and versions of the Batman we’ll be discussing:

As each character does change over time, I’ll also start each project by boiling down those elements that are true to all (or at least most non-parody) versions of the character, so we have sort of a baseline to start from. If you strip away everything else from Batman, here’s what we’re left with…

Batman is the crimefighting alias of Gotham City billionaire Bruce Wayne. As a child, Bruce was the only witness to the murders of his parents, Dr. Thomas and Martha Wayne. As an adult, Bruce has dedicated himself to eradicating crime and protecting the rest of the world from the tragedies that he has experienced.

I think that covers the important stuff, right? Okay, guys. Spread the word and I’ll see you back here on March 25 to talk about Lewis Wilson in the 1943 movie serial, the very first on-screen depiction of the Batman.