The Christmas Special Day 7: The Year Without a Santa Claus (1974) 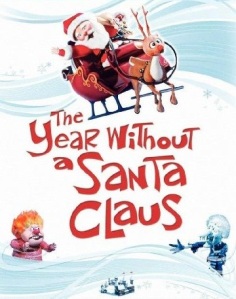 Writer: William J. Keenan, based on the novel by Phyllis McGinley

Plot: One year Santa Claus (Mickey Rooney) comes down with a terrible cold. His elfin doctor tells him people don’t care about Christmas anymore anyway, and the sad Santa cancels Christmas this year. With everyone distraught, Mrs. Santa Claus (Shirley Booth) sends elves Jingle and Jangle (Bob McFadden and Bradley Bolke, respectively) — with the reindeer Vixen — south to try to find some leftover Christmas spirit from the year before to convince Santa to get back on his feet. When Santa finds out they’ve left, he gets out of bed to try to fetch them, fearing they’ll run afoul of “the Miser Brothers.”

The elves, as it turn out, are heading right between the kingdoms of the warring Snow Miser (Dick Shawn) and Heat Miser (George S. Irving). Vixen barely escapes the Misers, and the trio land in nearby Southtown, U.S.A. They begin their search for Christmas spirit, but run into one person after another who doesn’t care… even children ambivalent about Santa Claus skipping his annual visit. They leave the children when Vixen – disguised as a dog – is taken away by the dogcatcher. One of the children, Ignatius Thistlewhite  (Colin Duffy) is later approached by Santa Claus. Ignatius directs Santa to the dog pound and he leaps upon Donner to fly to the rescue. Ignatius and his parents see the flying reindeer, and he realizes his mistake. The elves and Ignatius arrive at town hall at the same time, trying to plead to the mayor for Vixen’s freedom. The mayor doesn’t believe them, and jokingly offers to free Vixen if they can make it snow in Southtown. Meeting up with Mrs. Claus, the elves visit Snow Miser who – after one of the most rousing and memorable musical numbers Rankin and Bass ever produced – they ask to bring snow to Southtown. As it turns out he’d love to do that very thing, but his brother the Heat Miser won’t allow it. When they turn to Heat Miser, he agrees to allow snow in the south, but only if Snow Miser will cede to him the North Pole for a day. Realizing the brothers will never come to terms, Mrs. Claus goes over their heads to their mother… the notoriously reclusive Mother Nature herself (Rhoda Mann). Mother forces them to cooperate.

Unbeknownst to them, Santa has taken Vixen – sick from the heat – back home to the North Pole. Santa, still feeling ill himself, sits down for a nap, unaware snow is falling in Southtown. Mrs. Claus returns with newspapers proclaiming an official holiday in celebration of Santa Claus. All over the world, children come together to visit the North Pole and give gifts to Santa for a change. On Christmas Eve however, Santa receives a letter from a child who proclaims she’ll have a blue Christmas without him. Santa, touched despite the blatant plagiarism from an Elvis Presley hit, demands his sleigh be prepared for his traditional Christmas rounds. He makes a special journey to Southtown, appearing in public (I told you guys he constantly breaks that rule in the Rankin-Bass universe) to thank the children who taught him his lesson. He leaves to perform his duty, taking off from the newly-renamed Santa Claus Lane.

Thoughts: I was almost reluctant to include this one, based on my “one-per-franchise” rule. This film is considered by some to be a sequel to Santa Claus is Comin’ to Town, mostly due to the fact that Mickey Rooney returns as Santa Claus. But then I decided screw it – it would be easy to link together most of the Rankin-Bass specials and just as easy to declare that each one exists in a totally separate reality from all the others, so I’m just going to do the ones I want to. It’s my project, after all.

If I did want to think of it as a sequel (which I don’t), this is the Superman II of the franchise. The origin stuff is out of the way, so we can tell a solid, self-contained story without worrying about wasting time placing the pieces on the board. The cast is expanded and the threat is considerably greater than in the first film. Also like Superman II, this film features the hero deciding to eschew his responsibilities and struggle with questions of his own relevance, only to learn a harsh lesson about just how needed he truly is. In both films, our hero is rendered ill, wounded, and is eventually prodded forward by the urging of an outside party (Santa’s letter to the little girl, Superman given a plea by the President of the United States). Even the villains in each film take the opportunity to screw each other, setting up circumstances that directly lead to the solution to the threat. This movie, it should be noted, has 100 percent fewer Super Roofie Kisses than Superman II, so the metaphor isn’t a perfect one.

I honestly like this much more than Santa Claus is Comin’ to Town, mostly because – although it suffers from an unforgivable lack of Topper the Penguin (something else it has in common with Superman II) — it more than makes up for it with the introduction of the Miser Brothers. These are characters that have really become cultural hallmarks, at least for my generation. Their respective Heat Miser and Snow Miser songs have been covered by pop groups and rock bands, and even the most ardent Scrooge will find themselves singing along if that particular tune starts piping in through the mall sound system. Of all the characters created by the Rankin-Bass people from whole cloth (as opposed to being based on a preexisting tune or legend), these are the two that have most fully acclimated into American pop culture. They are the perfect example of a Rankin and Bass creep-to-be-redeemed. They aren’t evil, they’re just childish, and the ire they’ve directed at one another for such a long time has contributed directly to the lack of Christmas spirit in the world around them. It’s not a question of turning them away from being bad, it’s just a case of making them realize it will be better for everyone if they would simply cooperate with one another, a lesson similar to that learned by General Zod and Lex Luthor, and I swear to Krampus himself that’s the last Superman II reference. Today.

On a more personal note, the notion of snow in the south being the hallmark of real magic is something else that helps this special resonate with me. I’m from Louisiana, friends. White Christmases aren’t exactly common here. Neither are white New Years, white Valentine’s Days, or white Mardi Gras. It doesn’t snow down here much, is the point I’m making. So the idea of a little snow hitting specifically on Christmas really does carry magic in the south that those of you in colder climes may not realize. I offer the following evidence: a few years ago, against all odds, it actually got cold enough to snow in New Orleans on Christmas Day. It wasn’t much snow, just a dusting really, and my Yankee now-fiancé Erin just laughed when she saw how excited we were… but on that day, people flooded the streets. Everybody in the neighborhood was outside, kids who hadn’t taken their eyes off their X-Boxes in years were playing in the sun, throwing snowballs at each other and embracing the sudden burst of joy that was falling down as surely as the ice. My sister, who was 23 at the time, actually pulled the doorknob out of the door in her rush to get outside. It doesn’t happen here, friends. So I know how the folks of Southtown feel.

Like A Charlie Brown Christmas, this special proves that the fear of waning Christmas spirit isn’t a new problem at all. It’s actually kind of encouraging to realize people were afraid of these same problems forty and fifty years ago – if we’ve made it this far, maybe it’s just one of those things that never really goes away. But that’s okay, because there are people like Mrs. Claus, people of goodwill like you and me (admit it, you love Christmas, you wouldn’t have made it this far if you didn’t), and through our own small efforts and acts of kindness and acts of will, we’ll help the holiday persevere.