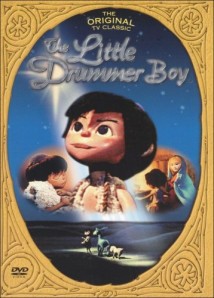 Plot: Aaron, an orphaned drummer boy (Ted Eccles), has grown up with a disdain for all humanity after his family was killed by bandits. His hatred grows even more intense when he and his few animal friends are abducted by a travelling salesman, Ben Haramed (Jose Ferrer). Ben Haramed paints Aaron’s face and forces him to perform at the marketplace for donations. He grows angry and lashes out at the people around him, and Ben Haramed’s troupe is driven from town. As they cross the desert, they encounter a group of three kings (all voiced by the great Paul Frees, who also voices Aaron’s father) who are breaking camp on a long journey to follow a star in the heavens. One of their camels has collapsed under the weight of his pack, and Ben Haramed sells them Aaron’s camel Joshua to replace it. Enraged, Aaron takes his remaining animals and sets out to find his missing friend.

He follows the same star as the Magi, finally arriving at the town of Bethlehem. Dozens of shepherds arrive as well, all following the same star. He tracks them to a stable, where they are bowing before a manger. Aaron and his animals rush to their missing friend, but his sheep Baba is struck by a Roman chariot in the streets. Aaron takes the dying sheep to the Magi, where he finds them presenting a baby in the manger with their gifts of gold, frankincense and myrrh. When one of the Magi tells him he cannot save Baba, he suggests Aaron take Baba to the newborn king in the manger. With no gift to present the baby, Aaron begins to play his drum. As he finishes, Baba comes back to him, miraculously healed. Aaron’s angry heart melts, as the star shines brilliantly over the little town of Bethlehem.

Thoughts: I don’t typically get religious in my writing, but it would be somewhat negligent to do a project like this one, examining the all-time great Christmas specials, without touching upon a few of them that actually deal with the true meaning of Christmas. Take this 1968 special by our friends at Rankin and Bass (oh, we’re just getting started with them, folks), which dramatizes the old favorite of the Little Drummer Boy.

Rankin and Bass took the classic song and greatly expanded upon it, giving the little drummer boy a backstory, a reason for being in Bethlehem, and a name. For the most part, the additions to the song work very well. The add-ons make Aaron a very different kind of character than the cipher who arrives in the song to humbly play his drum for Jesus. Instead, we’re introduced to a child who has shut himself off from the world, keeping his affection only for his animals. Aaron turns to Jesus to save his friend, but viewed through a spiritual prism, it’s clear that Aaron himself is the one who truly needs salvation. In a very real way, this special makes the Little Drummer Boy the first soul to be saved by the Son of God. It’s a very clever angle to take, rooting the story very strongly with the Bible tales and making Aaron a far more significant character than he was described as previously. It doesn’t change anybody’s religion, of course, but taken from a narrative standpoint, writer Romeo Muller came up with a really good way to make this cartoon matter in a way the original song really didn’t.

The music here is strong, if not quite as iconic as many of the other Rankin and Bass specials. The original “Little Drummer Boy” is the only one that really stays with you after the show is over, and that’s mostly because it’s a piece that virtually everybody who watches this will know already.

More so than some of the other films we’ve looked at (or will look at) this short does express some of the limitations of early stop motion animation, especially in terms of precision. As Aaron plays his drum, the beat doesn’t match the movement of his hands. When we get to the line where “the ox and lamb kept time,” the camera pans across them nodding rhythmically, but not in the same rhythm as the song. You feel a little bad for chuckling at this, as it is supposed to be a wonderfully somber moment, but fortunately the emotion of Baba’s rejuvenation sweeps in as the song ends to save the day.

This isn’t the greatest religious-themed Christmas special, but it’s one of the earliest greats. Other films would later tread over some of the same ground, and one imagines director Don Bluth was drawing on this ten years later when he created his last short for Disney before striking out on his own, The Small One. Were this a project about Christmas films in general and not just television specials, you can rest assured, Small One would have a place of honor. As far as the TV spots goes, if you’re looking for one that actually features the nativity, this is as good as it gets.