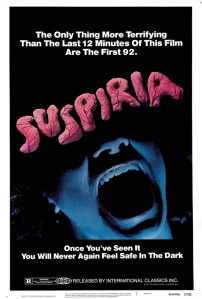 Plot: Suzy Bannion (Jessica Harper), an American ballet student, is attempting to enroll in a prestigious dancing academy in Freiburg, Germany. When her flight in from Munich arrives late on a terribly stormy night, though, she is unable to enter the school, and must spend the night around town. As she searches, a student who has been expelled from the academy, Pat Hingle (played by Eva Axén, although I find it hysterical that the character has the same name as the actor who played Commissioner Gordon in the Tim Burton Batman movies), takes refuge with a friend, but both girls are brutally murdered by a strange, largely unseen creature. The next morning, Suzy returns to the academy and meets Madame Blanc (Joan Bennett) and Miss Tanner (Alida Valli), as the school is buzzing about Pat’s death. Suzy is sent off-campus to live with another student , Olga (Barbara Magnolfi. When a dormitory room is made available, she declines the offer. In her first dancing class, Suzy suffers a fainting spell, and wakes up to find that she’s been moved into the dorm room anyway, and the doctor wants her to eat bland foods with a glass of red wine at every meal for a week. When maggots suddenly fall from the ceiling, supposedly due to a box of spoiled food in the attic, the girls are forced to sleep in the academy’s practice hall. There, Suzy’s friend Sarah (Stefania Casini) recognizes a whistling sound as the snore of the school director, who is supposedly out-of-town. Suzy and Sarah search Pat’s room for notes, but Suzy falls asleep, leaving Sarah to be lured, alone, into a trap of razor wires, where the unseen creature returns and slits her throat.

The next morning, finding Sarah missing, Suzy seeks out a psychologist (Udo Kier) who tells her that the academy was actually founded by a Greek woman believed to be a witch, and that her coven cannot survive without their queen. Suzy returns to the school and finds that all of the students are missing, having gone to the theater. She follows a mysterious set of footprints to Blanc’s office, where she finds the staff plotting her death in a horrible ritual. She flees, encountering the school’s director – the original witch who founded the school . The witch sends Sarah’s reanimated corpse to kill Suzy. Suzy fights her way out, and the building burns to the ground with the witches inside, Suzy barely escaping the horror.

Thoughts: This is one of those times where I really must stress the importance of taking care of and pride in your work. Susperia has a place in the hallowed ranks of horror, but its effectiveness was seriously damaged for me by the shoddy presentation. The DVD release available through Netflix was absolutely terrible, with picture and sound that both appeared to have been ripped directly from some ancient VHS tape that had long since begun to degrade. If a movie like this doesn’t deserve a quality restoration, why even release it on DVD?

This isn’t the fault of the film, of course, but it does detract from one’s enjoyment. Trying to get past that, we look at the strong points of the film. Sadly, considering how poor the video quality of my copy was, this is a movie that is largely remarkable for its visual style. Dario Argento sets the film in bright, primary colors –red hallways that have an almost velvety texture to them, blue walls in the main hall, and ubiquitous use of yellow in the dance studio and other places. When the deaths happen, the precise shade of red is so bright and eye-popping as to be almost unrealistic, while at the same time giving the film a very different look that most of the other films we’ve discussed on this list. The blood in, for example, Last House on the Left probably looks more realistic, but the blood in this film is more memorable.

The makeup is also impressive towards the end of the film. Sarah’s corpse, done up in a horror mask for her terrible attack on Suzy, is in fact the stuff of nightmares. Although Sarah isn’t really referred to as a zombie, she’s not far off from the original Haitian concept of the creature: a deceased person brought back to a semblance of life to serve the bidding of a master. In this case, it also plays on the most evocative fears of the zombie trope, the idea of taking something familiar and safe and transforming it into something horrible and deadly.

One of the weaknesses, though, is that the movie often tries too hard to inject fright in mundane scenes. Suzy’s constant encounters with creepy members of the staff at the ballet academy are often punctuated with loud, hypnotic music that succeeds in creating the desired mood. When combined with the looks of the characters, though, it starts to feel a bit much, like we the audience are being beaten over the head with the fact that something EEEEEEEVIL is going on around here, consarn it, and we’re gonna take notice whether we like it or not. Back to the music for a moment – it’s really very good. It’s scary and evocative, and I could imagine it being a Halloween standard like the themes to Psycho and Jaws if not for the fact that the main theme is played approximately 18,921 times throughout the course of the 92-minute film, robbing it largely of its effectiveness.

What’s more, the story isn’t particularly strong. Go back and read my synopsis again. Does it seem like a kind of bizarre, disjointed story here things happen for no reason and nothing really seems to make sense in the context of anything else? Excellent: I have successfully conveyed the feeling of watching Suspiria.

Contextually, I find it interesting that 1977’s great Italian horror film goes back to witches, a topic which had largely lapsed in the United States at this point. Perhaps I’m projecting – I’m an English teacher, remember, and at the time I write this particular analysis my 11-grade class is deep in study of Arthur Miller’s The Crucible – but it’s difficult to think of an American audience of the late 70s putting this much stock into the concept of witchcraft. In Italy, who knows? Maybe it was different.

The marketing certainly was different – look at the tagline on the movie poster. “The only thing more terrifying than the last 12 minutes of this film are the first 92.” Maybe I’m splitting hairs here, but isn’t that essentially saying the end of this film isn’t as good as the rest of it? If that’s the case, it’s true. Except for the creepy attack by the ex-Sarah, the ending is horribly anticlimactic, with a weak appearance by the head witch and Suzy pretty much just waltzing out of the academy just before it bursts into flames for no apparent reason.

Except for the visuals, honestly, I’ve got nothing to recommend this movie. Thank goodness tomorrow’s film is, for me, a proven commodity: John Carpenter’s classic Halloween.